<<< Tommy Turnquest, Minister of National Security with responsibility for the Broadcasting Corporation of the Bahamas.

Click to listen to this CUNNING report by ZNS saying Prince Charles Shopping Centre is SAFE.

Nassau, Bahamas — Some WUTLESS people up at ZNS don’t know the difference between regular crime and the WILD WILD WEST. In the Bahamas we have no longer petty theft or shop lifting as a problem, it’s much bigger than that. In today’s Bahamas, police chases into downtown Nassau and shootouts on Prince Charles is the problem. Shoppers being held at gunpot and robbed, and if you ain’t so lucky you can get a bullet or two or three pending on the criminal mind behind the trigger.

In a report last evening ZNS attempted to put a spin on the whole crime problem up at Prince Charles Shopping Centre. In the report ZNS reporter suggested that Prince Charles is the safest shopping centre in the country. They interview two store owners who agreed, and had the police place the icing on the cake. Well, is that true? Officers of the eastern division were highly praised by some tennents of stores in the area, but what are they not saying in that report was the violent episode which just took place last week.

Last week the Tribune reported of some serious criminal incidents taking place in the area. What was ZNS trying to do when they were crafting this story on Sunday? They stretched their lie so far that they concluded that Prince Charles Shopping Centre has no criminal activity and is safe. Here’s the way the morning daily however reported last week’s story:

A shootout in broad daylight erupted near the KFC outlet on Prince Charles Drive when bystanders tried to rescue an old woman who was being held up for her purse.

What started out as an attempt by good Samaritans to catch a purse snatcher turned dangerous when the perpetrator pulled out a gun and starting shooting randomly.

Witnesses say the situation descended into complete chaos when an unidentified man in a car pulled out a shotgun and began firing back at the gun-wielding thief.

While those who initially confronted the robber were praised for their bravery, people on the scene criticized the police for not responding to calls quickly enough and said they fear Nassau is becoming a lawless town.

One said: “It felt like a movie. Nassau has become like the Wild Wild West, where someone can walk up to you in broad daylight and kill you.”

The incident began at around 6pm on Wednesday when an old woman was accosted by a man as she walked down a side street near the back of the KFC building. An unidentified man saw what was happening and ran over to help. He was quickly followed by several other men.

By the time they got to the victim, the robber had snatched her purse and taken off running down the side street. The men eventually, caught up and attempted to tackle him to the ground, probably hoping to hold him there until the police arrived, witnesses said. 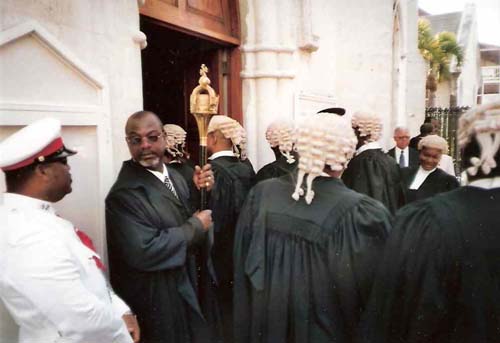 Now that is what the Tribune reported not BP. The Tribune carried it under the title ‘Another Wild-West Shootout in Dangerous Nassau, Bahamas’. And if you were following the news for a while, you would remember last year how thieves attempted to rob an armor truck making rounds at the Royal Bank of Canada in the area. You would remember one of the robbers were shot by police and the other was chased into the Sea Breeze area following another shooting episode. All this happened in big broad daylight!

But here in the WUTLESS ZNS newscast last night, is some ill informed reporter, telling the country Prince Charles is the safest place to shop and the BIG HAT police officers are right there nodding in shameful agreement. SAFE? With old women getting knocked to the ground and robbed, and citizens in crossfire shootout all in BIG BROAD DAYLIGHT? SAFE MY FOOT! All we at Bahamas Press say is this, if the WUTLESS ZNS and Police tell you it safe, STAY FAR, VERY FAR away from the area!

Don’t forget now, Tommy Turnquest and the ‘Vigzy Head’ Judiciary both love to protect criminals and release them on bail. They both allowed 205 to walk out of jail in April. And guess what? according to Tommy, he looking for the person who gave us the list! Boy, das some brains for ya ech?