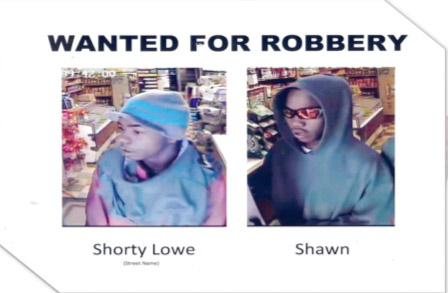 Nassau, Bahamas – The roof of an unoccupied building on the grounds of Police Headquarters was totally destroyed during a fire on Wednesday 6th March, 2013.

According to reports shortly after 2:00 pm officers of Fire Services observed smoke emanating from Ranfurly House, which is located in the western area of Police Headquarters.

Police are requesting your assistance in locating two men whom they want to question reference to an Armed Robbery.

The incident reportedly occurred around 10:00 am on Saturday 2nd March, 2013 at a business establishment Market Street and Oxford Avenue.

Preliminary reports indicate that two (2) men, one of whom was allegedly armed with a handgun entered and robbed the establishment of an undetermined amount of cash and cell phones cards and fled the area in an unknown direction.

The men go by Shorty Lowe and Shawn.