Nassau, Bahamas — Bahamas Press has learnt a police officer has been arrested after being caught bald naked with a 15-year-old schoolgirl at his home.

The incident occurred this week in a quaint community in Southern New Providence community.

Sources confirming the incident tell us the young girl is believed to be held against her will in the officer’s home and may have been sexually molested by the lawman.

Senior command on the force tell us the officer will be interdicted and discharged for his actions which is clearly not in standing with codes that govern the force and is contrary to law in the country.

“We want to make it unequivocally clear that there is no room on the RBPF for rogue officers who seek to discredit the organization. We have no room for such ill –willed individual and those who seek to go against the oaths they swore to; to uphold law and justice in the country. Anyone who breaches such shall feel the full weight of the law against them,” a senior officer said today.

The officer was stationed at a New Providence precinct. 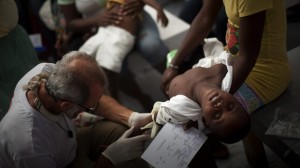 The Ministry of Health wishes to report that a patient was evaluated at the Princess Margaret Hospital on the 18th of October 2012 due to symptoms of vomiting and large volume diarrhea.  The patient appeared unwell on arrival, was treated for suspected Cholera, and has since recovered.  Laboratory tests were able to confirm Cholera, today, the 29th October, 2012.

The Ministry of Health can confirm that it continues to investigate this matter and that there are no other reported cases of Cholera in The Bahamas.

There are increased rates of Cholera in countries around the world. The Ministry of Health continues its heightened surveillance activities and other necessary precautions to identify cases and prevent the transmission of Cholera in The Bahamas.  The public is reminded to use clean water, wash hands regularly and otherwise maintain good hygienic practices to prevent Cholera from developing and spreading.

As usual, we shall continue to keep the public informed of all matters affecting public health.

BREAKING NEWS HAPPENING NOW! A woman, Melissa Deal, is at this hour in Court #3 before Magistrate Ellen Serville, charging that a newly appointed judge of the Supreme Court has failed to pay child support.

The revelations now underway suggests that the Judge has abandoned a child he allegedly fathered outside of his marriage.

Bahamas Press teams now in the courtroom report the entire courtroom was left in shock and the Magistrate stunned by the revelations; with here eyes left wide open.

The young woman said while she was represented the lawyer at the time, she paid him with sex when she found herself on the wrong side of the law. The judge was also caught up in an alleged scandal with his former law partner.