Faces which met their untimely deaths in The Bahamas. Victims of murder now 50 scream from the grave.

Nassau, Bahamas — Police-in-charge at the Southern Police Station, Stephen Dean, took us by surprise as he carried out an interview on Friday with the Cable 12 channel and again with JCN channel 14 on Monday praising the police.

Now on Friday in the newscast Dean highlighted an idea of officers patrolling the homes of residents out of the country on vacation. He noted that the police on a constant basis would visit homes to make sure they are secured whilst families are away. It sounds like a good plan hey? But anyone seeing the record number of officers now dragged before the courts for ‘THIEFIN’ people things, they would quickly abandon the idea of using the programme. 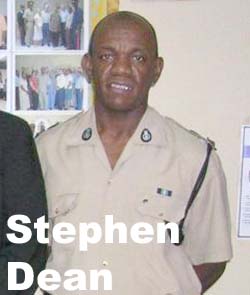 And then there was the newscast on Monday, where Dean reported that murder was down in the southern area against last year figures. His comments came following the sudden weekend murder of a young mother. Bloggers would note Dean never told the public what those numbers were last year. Nor did he share what those numbers were this year, but he says it down, so it down.

Readers would remember Dean has he yet make a single statement to the public on the murder, which took place in the southern police precinct. Yes, we are taking about the incident where police at his office said a boy hung himself in the station. We don’t buy that story one bit!

Members of the public would now remember that Dean only found his voice to tell the press he was congratulating the police, after a mother of two, 29 year-old TaGia Soles-Armony, who was visiting The Bahamas from her home in St. Kitts, was killed by a gunman in the area. Bahamas Press wonders if officers like Dean think we’re STUPID? Police are expressing commendation on themselves whilst a would-be robber, right in front of young children, murders another innocent woman in cold blood. What asinine statement is this coming from the police?

But imagine this, Armony had just returned here in The Bahamas on last Sunday for a visit with relatives. She lives in St. Kitts. And just days after her arrival here she is a dead woman. Or look at this, businessman Hywel Jones a British citizen was stepping out of his car in western New Providence when someone came up to him and shot him in the head. He died days later. Or remember this, 33 year-old Anna Michelle Garrison, was a woman from West Palm Beach. She was the woman found wrapped in plastic and a bed sheet on the side of a lonely road in Fox Hill on July 4th. Or did Dean remember this incident: Tim Massa’s, the 30 year-old teacher from Connecticut. His body was found on a Monday night early in the year floating in the harbor near the Atlantis Resort where he stayed. The U.S. State Department reported that they were investigating the case as a possible homicide. Not one word of an update has come from Bahamian police on these . And members of the WUTLESS MEDIA refuse to ask about them. WHY?

On all these incidents, which happened this year – with the exception of Garrison – NONE ARE SOLVED! With the exception of Garrison, their killers are still lurking the streets looking for more blood. Yet a braggadocio attitude of Dean in the midst of all this slaughter, mayhem and rising blood is sending congratulations to officers in wake of the murder of a young mother.

All we would say is this, If we were a country sending one of our girls to compete at the Miss Universe Pageant here in The Bahamas, knowing The Bahamas is the #1 place in the world for rape incidents and knowing it has one of the highest per capita for murder, we would’ve dispatch a small military contingent to protect our queen. She would’ve met them waiting at the LPIA when her plane touched down.

Why would an officer come on the news to congratulate themselves only after a brutal murder takes place? After seeing members of the public racing in and out of their vehicles [some being killed in the process] in fear of the rising levels of crime in the country. The war of crime for years occurred on the ground with ordinary Bahamians and many still see no justice. Today, that war is not hitting on guests, taking them out one by one. WHAT A BLASTED SHAME!

Again this reflects exactly how WUTLESS those in the media are, reporting such asinine statements by police when the facts tell a different picture.