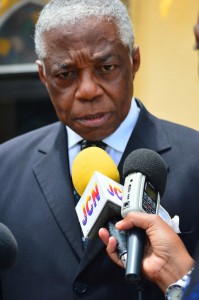 The Ministry of National Security has been advised by The Royal Bahamas Defence Force that investigations into the alleged assault of Cuban detainees at the Detention Center have been completed, and that proceedings under the Defence Act against the persons implicated in the incident will commence imminently.

The proceedings are being conducted in accordance with the legal rules prescribed under the Defence Act and Regulations, which approximate a trial before a Magistrate’s Court. As such, we will refrain from making any comments concerning the proceedings while they are under consideration.

The hearings will be held in camera, but a full report of the proceedings will be issued at their conclusion. This is to avoid publication of matters which may compromise national security.

However, three independent observers will be permitted to attend the hearings in order to assure the public that the proceedings are transparent and just.

Mr. Justice Emmanuel Osadebay (Ret’d), the Rev. William Higgs and former Superintendent of Police, Mr. Douglas Hanna have agreed to serve on a committee to inquire into the administration of the Detention Center and to make recommendations for its efficient administration and management. This committee has been asked to complete its inquiry within a reasonable time.