Both politicians and reporters expressed disgust at the flopped event, which many suggest was poorly organized by PR Firm…

Nassau Bahamas — The Prime Minister told reporters, “Why y’all blaming the PLP for the Miami trip? We didn’t invite y’all so why y’all did that to the PLP?

“What has happened is I noted criticisms by certain journalists and their disappointment in how the Genting affair was organised or not organised. I was sort of bemused about it because we were invited like the press was invited.

“It is my understanding that the Counsellors was retained by Genting to coordinate the trip to invite the press and presumably to put in place all that needed to be put in place.

“Other people who are important persons in the government felt that things could have been better organised and expressed some degree of disappointment. (But) for me I think I left there really feeling a sense of great vindication over the great effort that we had made as a government to bring about the kind of relief and restoration that the people of Bimini would experience as a result of the development.”

Reporters bitched and bawled over the event complaining how they were bumped off flights and didn’t know what to do to record the event.

Bahamas Press first yesterday scolded reporters for their screams as in the first place they collected their invitations and assignments from a private firm who we know was hired by the resort to organize travels and PR for the event.

We also reported how sources deep in the know told us how the Bahamian PR Company was paid a handsome cheque to carry out the exercises for the resort – which were poorly organized.

This morning in the Tribune, after our report, a spokesperson for the firm of Counsellors, Joan Albury, defended the fact that they were not in charge. And we question, though paid, whether they were even there.

The Counsellors, we know, is badly short staffed PR firm and could not organize the opening of a Chicken Shack much less a mega resort like Bimini Bay.

According to reporters, no one told them what to do in Miami for the “NO Sail” ship event, nor were they guided in Bimini at the opening.

If this is true, it means that someone ran off with plenty plenty money and did almost nothing.

Bahamas Press has been digging up these connections with the Counsellors and from what we know the story is not good.

For one, the firm is short staffed, with the few working themselves to the bone, stretched like pizza dough.

We also found out that Joan Albury and the man inside the Office of the Prime Minister, Baltron Bethel, are cousins. Bethel, we know, is charged with working these major hotel resorts with deals with the government and some tell us have suspiciously and surreptitiously connected Counselors on retainer with many of the government deals on the drawing board. How fair is that? 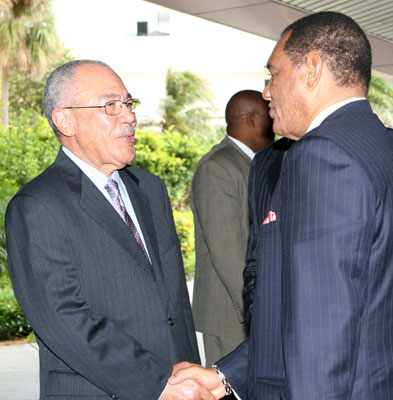 Could he - Baltron Bethel - be secretly fishing PR work with investors to the Bahamas to his relative's PR company??? UNKNOWN TO THE PRIME MINISTER?

But that’s just half of the story. A source in a position to know has alleged, that Bethel is not only a relative to Counsellor’s operator Joan Albury, but may be also an owner in the PR firm.

What in the hell is this?

Staff was HEARD in Bimini saying how they are tired of working so hard and how the operator REFUSES to hire people so to keep the money for herself while working the slaves to death.

Bahamas Press reported yesterday how that firm was paid big money to assist in the opening of the Bimini Casino. The question is: What happened with all dat money?

Readers would remember it was this same PR Firm which botched the Say “YES VOTE” Campaign and took workers with T-shirts in  the Treasury Building of the Government to shoot adverts in the heart of the purse. IT WAS WRONG; Particularly since the Christie Government at the time said it had no horse in the race.