Christie takes his message on the road…

CAPE ELEUTHERA, Eleuthera, The Bahamas – Prime Minister the Rt. Hon. Perry Christie said, on April 24, 2014, that tourism is “on the upswing in Eleuthera”.

“From January to December 2013 a total of 249,017 visitors came to Eleuthera,” Prime Minister Christie said. “However I feel that we can improve on this number and will improve on it with the development of a few new resorts on the island.”

He noted that the Cotton Bay development in South Eleuthera is set to “change the face of tourism in that part of the island significantly.”

“With 75% of construction of phase 1 of the project complete, the developers have already invested $90 million to date,” Prime Minister Christie said. “The resort aims to re-establish the legacy of the jet-setting families of the 50s, 60s and 70s that frequented the club community, making them homes away from home.”

He added that, to continue to enhance tourism on the island and support the Cotton Bay development, particular attention will be given to airlift in South Eleuthera.

“Cotton Bay is also a good example of a development that attracted the interest and investment of Bahamians,” Prime Minister Christie said.  “Franklyn Wilson serves as Chairman of Eleuthera Properties Ltd.”

He said that the government is well advanced in negotiations with the Samiento and Four Seasons interests for a Four Seasons branded luxury resort also here in South Eleuthera.

“I am told that my professional advisors will meet again next week with Four Seasons representatives with a view to wrapping up the terms of a Heads of Agreement for approval by the National Economic Council, which I chair,” Prime Minister Christie said.

He noted that while the course for tourism is set and bodes well for the economy of Eleuthera, there are other developments and changes that will and must happen to ensure growth in Eleuthera.

Prime Minister Christie said the building of a new hospital in Palmetto Point will go a long way in serving and supporting the immediate community and populations for the whole Island. The land has already been acquired with plans being drawn for a hospital that meets local and international standards, he noted.

“This should provide a boost for meeting the basic medical needs of residents and visitors alike,” he said.

He stated that while stakeholders work towards an economic renaissance in Eleuthera, they must remember that the pineapple is the symbol of hospitality throughout the world.

“As a significant part of engaging the hospitality community in the revitalization of Eleuthera, the Government’s National Training Programme is gearing up to train locals. This programme will help to facilitate the education and skills development of the workforce with extensive training initiatives and standardization of service levels,” Prime Minister Christie said.

He added that, upon successful completion, persons will be provided with valid certification.

“In the time honoured tradition of the proud people of Eleuthera, let the highest standards of service be one of the most distinctive features to be found on this island,” Prime Minister Christie said. “With help from the Government, public private partnerships and significant investment from both Bahamians and foreigners, this island is on a course headed for major economic growth.” 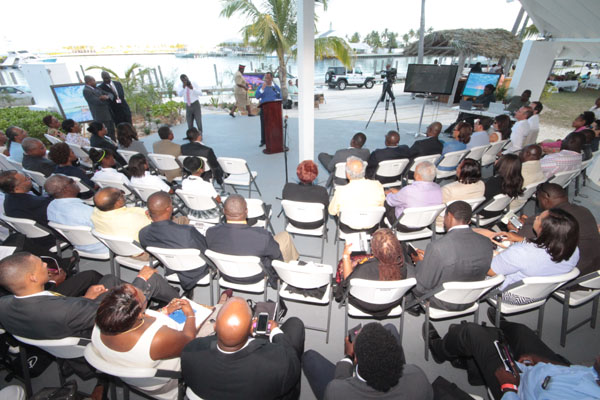