SENATOR MAYNARD UNVEIL BACONS ILLEGAL ACTIONS – Here’s a story the CPCB does not want the public to remember!

Where was the Bahamas National Trust then? Who got paid and by whom?

Lyford Cay resident, billionaire Louis Bacon’s dirty deeds are catching up with him, as senators last week exposed that he illegally dredged the sea bed near to his Lyford Cay estate.  Opposition leader in the senate Allyson Maynard-Gibson tabled in the Senate last Monday documents that suggest that Bacon carried out dredging without the necessary government approval.

However according to the senator this dredging was carried out, and once complete his attorney and supposed environmentalist Pericles Maillis attempted to get the then Minister of the Environment Dr. Marcus Bethel to approved the already completed project.

Senator Maynard-Gibson stressed that the PLP did NOT approve this permit. In 2006 Minister Bethel says that he did not approve the permit. He was not going to ratify work already done.

Below is the email thread tabled in the senate by Senator Allyson Maynard-Gibson
> Subject: Re: Louis Bacon – Boat Basin
> From: mbethel@coralwave.com
> To: bradleybe43@hotmail.com
> To: keod_smith@yahoo.com
> To: allysongibson@hotmail.com
> To: fitzgerald.jerome@gmail.com
> Date: Thu, 9 Dec 2010 11:20:03 -0400
>
> Dear Bradley
>
> My knowledge of the captioned item reveals that as Minister with
> responsibility for the Environment I was approached by Mr. Pericles Maillis
> representing Mr Bacon to approve dredging at the property that had already
> been completed without the appropriate approvals.
> This request was immediately and unequivocally turned down by me because I
> was not prepared to validate any action that did not follow the necessary
> process.
> I felt that it was arrogant and disrepectful of his client to proceed with
> any dredging without the necessary approvals and informed Mr. Maillis of my position.
> After the FNM government assumed office I was contacted by Minister Dion
> Foulkes about this matter and informed him of what had transpired during my
> watch.
> That is where I left the matter.
> Marcus Bethel
>
>
> On Tue, 7 Dec 2010 06:54:58 -0500
> “Bradley B. Roberts” <bradleybe43@hotmail.com> wrote:
> >
> > Dear Keod, I repeat I did not grant any such approvals. I am coping
> >Senator Leader Allyson Gibson and Senator Fritzgerald and request
> >their assistance on the answer you seek. Please feel free to contact
> >them directly.
> >
> > Regards,
> > Bradley B.E.Roberts, National Chairman Progressive Liberal Party,
> >Former MP and Cabinet Minister Of The Bahamas.
> >
> > 242-327-7850 Home
> > 242-422-4477 Cell

With that said Senator Maynard-Gibson said the matters touching and surrounding this permit ought to be tabled here in the Senate.
o    Dredging in 2007

o    Not ratified in 2007 by Minister Marcus Bethel

The senator believes that something is not right with the picture. Well Bahamas National was has acquired a copy of the said permit signed by director of Physical Planning Michael Major.

We call on the Director of Physical Planning to come clean or face exposure. 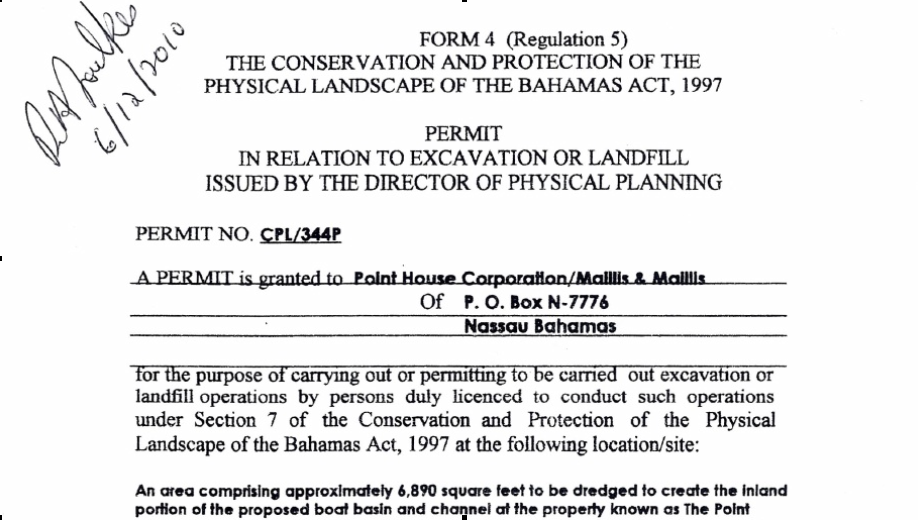 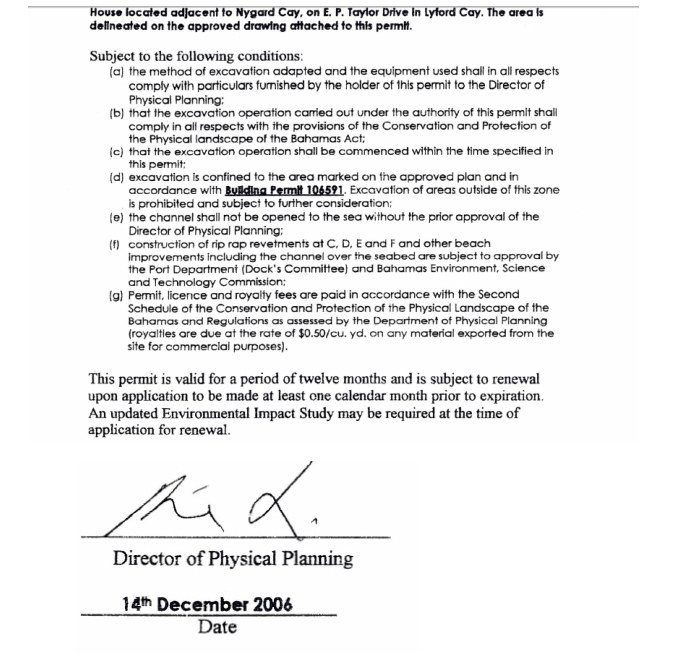 The question is what exactly is the validity of this permit which was tabled in the Senate?  If this permit was legitimate, then why is it that there as a need for the FNM to re-issue a permit sometime after May of 2007?  It must mean, according to the opposition leader in the senate that they were not of the view that the 14th December, 2006 permit existed or that it was not legitimately issued by Mr. Michael Major.

Senator Maynard-Gibson said she thought that it would be proper and honest for Minister Foulkes to disclose and table to the Honourable Senate all of the following documents:-

1.     A memoranda coming from the Chairman of the BEST Commission that it approved of the Bacon development with an exhibit of an Environmental Impact Assessment duly conducted and signed off on;

2.     A memoranda from the Minister of Environmental Health Services showing that he approved of the Bacon development;

3.     A memoranda from the docks committee indicating that it had no objection to the excavation and construction of the Bacon development or that it did not fall within their purview;

4.     The internal memoranda signed off on by Minister Roberts that he approved of the Bacon development.

Senator Maynard-Gibson told the senate that, the reason why these items were not tabled is because they do not exist and Minister Foulkes, by his Freudian slip admitted that they didn’t exist by saying that there was need for his Government to issue a permit after the December, 2006 permit had been purportedly issued.

“Naturally, this all begs one question to be answered by production of physical evidence; AND THAT is why did he not table the permits which he says his Cabinet issued after they took Office in May, 2007?” Senator Maynard-Gibson said. “Could it be that he and Senator Vanderpool-Wallace are attempting to mislead this Honourable House and the Bahamian public?”