FREEPORT, Grand Bahama – Patients and staff were evacuated from the Rand Memorial Hospital at 2:30 p.m. on Friday, July 17 as a result of a fire in the kitchen.

According to Minister of Health, Dr. the Hon. Duane Sands, there were no serious injuries to patients and three staff members were treated for smoke inhalation. One of the victims, a doctor who was a part of the response team, is recovering in hospital.

“Ladies and gentlemen, God is good. We were fortunate that there were no serious injuries to any patient, but more importantly we have seen phenomenal dedication and professionalism by the staff of the Rand Memorial Hospital. It is a tribute to their immediate response and phenomenal teamwork that what could have been an absolute calamity, what could have been a tremendous disaster has turned out, in many instances to be, a significant inconvenience. But, no lives lost and so I want to go on record as commending the staff, the administration, the doctors, the nurses and every single staff member, not only at the Rand Memorial Hospital but from the Fire Services, the Police Department and everybody who has assisted.”

Briefing the media, following a tour of the affected area on Friday evening, Minister Sands made the following statement:

“At about 2:30 this afternoon, the deep fryer, located in the kitchen caught ablaze. As a result, the staff working in the kitchen attempted to extinguish the fire. But their attempts were not successful. The fire services were summoned and they responded immediately, at about 2:48 pm.

“Staff members and patients were evacuated to designated areas because of primarily smoke throughout the hospital. Non-acute, or stable patients, were transferred to Christ the King from the Surgical, Medical, Obstetric, and Pediatric areas. And those patients are being housed and managed by physicians, nursing staff and other staff until further notice.

“Intensive care patients and special care baby unit patients were transferred to Sunrise Medical Centre where they are continuing to be managed by Rand Memorial Hospital staff. Two acutely ill patients, who were previously scheduled for transfer to Nassau, have also been sent to the Sunrise Medical Centre where they continue to await evacuation tonight.

“There were no injuries or casualties to patients during the blaze, the resultant smoke or the evacuation process. There were three staff members who suffered mild smoke inhalation problems and have been treated. One of them remains in hospital.

“There are now six adult patients at Sunrise, one obstetric patient who is in active labor, five Intensive Care Unit patients – two of whom, as I mentioned, will be leaving by air ambulance. There are five newborn special care baby patients.

“There are 37patients at Christ the King – One nursery patient, three pediatric patients, 14 medical patients and 14 surgical patients.

“As a result of the fire, the following changes in services will be in effect until further notice. Non-urgent cases should seek care at the Out Patient Special Care Unit on Coral Road and the Eight Mile Rock Clinic until further notice. Any pregnant woman with pregnancy-related concerns should go to the Sunrise Medical Centre.

“Initial reports thus far, and we have completed several walkabouts, confirmed that the Rand Memorial Hospital is not extensive, that it is confined to the kitchen and we will resume full services in short order. The public will be updated again tomorrow morning but we anticipate that some patients will be brought back to the Rand Memorial Hospital within a few hours.

“Over the course of the next few hours, there will be a lot of work to be done. The Deputy Prime Minister came to the site immediately, and I am advised that the Prime Minister is on his way and he should be landing in Grand Bahama within a few minutes.

“We are grateful that everybody is well and we appreciate the patience of the general public during this time. But once again, we have to be extremely grateful to the staff of the Rand Memorial Hospital.”

As a result of the damage to the kitchen provisions have been made for meals for the staff and patients from local vendors.

Prime Minister, Dr. the Hon. Hubert Minnis, arrived before the end of the briefing and was also taken on a tour of the affected area. He, along with the other officials, then walked over to Christ the King and greeted the evacuated patients. The delegation then moved onto Sunrise Medical Centre to see those patients as well. 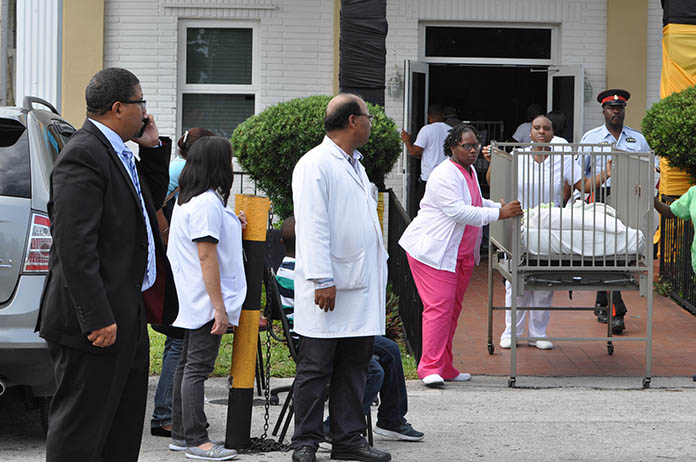