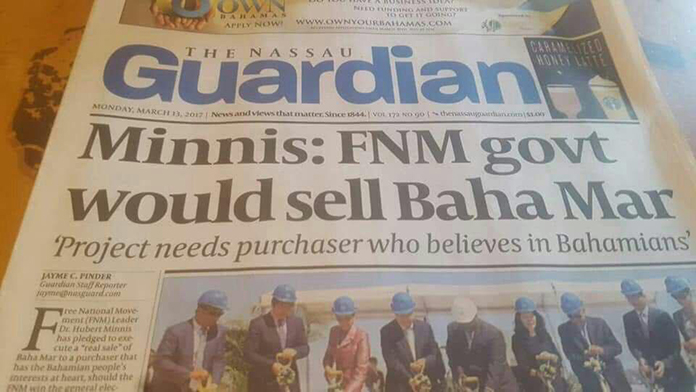 In case Bahamians were wondering, that was in fact Prime Minister Minnis at the official opening of the SLS brand luxury hotel at Baha Mar this weekend after doing everything in his power to destroy that project for narrow political gain; so much for building up the common good.

Bahamians, that was not a hologram or a PR stunt, that was the hypocrite in the flesh; live and in living colour.

The opening of the casino hotel, the convention center, the golf course and club house under the PLP were not actual official openings but PR stunts staged by the PLP government. This according to Minnis and the FNM while he served as Opposition Leader. Apparently Baha Mar is only open when the FNM says that it is.

The facts however tell a totally different story. Former Prime Minister Christie outlined in meticulous detail the strategy and timeline for the phased opening of Baha Mar in a Heads of Agreement, at press conferences, from the floor of the House, in multiple media interviews and from the rally stage. To date, EVERYTHING announced by the PLP surrounding the rescue and opening of Baha Mar turned out to be true and are coming to pass just as the former Prime Minister and former AG outlined them.

The unsecured contractors and thousands of displaced Baha Mar employees were paid over $100 million at no cost to the tax payers of this country; a buyer with impeccable international credentials in the hospitality industry was secured and Baha Mar was rescued and placed back on track to realize its full economic potential.

THE FNM POLICY ON BAHA MAR WOULD HAVE BEEN A COLOSSAL DISASTER AND AN ABJECT FAILURE FOR THE BAHAMAS EVEN WHEN THOSE WHO ASPIRE TO LEAD CONSPIRE TO MISLEAD OUT OF SPITE!

That failed Minnis policy on Baha Mar would have gotten even worse for The Bahamas had Dr. Minnis gone through with another ill-advised election promise to sell Baha Mar to a buyer of his choice.

It is high time that Dr. Minnis comes clean with the Bahamian people and admit that he and the FNM were all wrong and dishonest on Baha Mar and the PLP was right and truthful about Baha Mar.

The record clearly shows that to date, all of the positive developments in the country were the direct result of the work of the PLP who built a firm and solid foundation of progress while in government.

Thanks to the PLP for the rescue strategy for the Bank of the Bahamas that has placed that financial institution in the black and protected the savings of thousands of depositors. Minnis tried unsuccessfully to force a run on that bank but God is good even in the face of evil.

Thanks to the PLP for the UAE alternative energy project signing.

Thanks to the PLP for the international routes policy of Bahamasair. First Port-Au-Prince and now Houston, Texas.

Thanks to the international investors who oversubscribed three-fold on the $800 million Bahamas government bond placement as this over subscription proved the FNM misled the Bahamas and the international community when they pronounced that the Bahamas was broke and the cupboard was bare. The PLP can rest its case that the country is not broke and that the Christie administration managed the Bahamian economy prudently and with competence. Sensible, intelligent and discerning international investors with no political axe to grind made the case for the PLP, exposing and shaming inveterate liar Finance Minister Peter Turnquest who many have argued has no shame – only foot in mouth disease and is a stranger to the truth.

Mr. Turnquest remains the most incompetent Finance Minister ever and Minnis’ most expendable and vulnerable minister.

Minnis for his part should express his gratitude to the thousands of current Baha Mar employees; he should apologize to the Bahamian people for his deceitfulness and in the interest of decency, order and good governance, he should keep D’Aguilar as far away from Baha Mar as the east is from the west.

WSC Chairman refusing to pay water suppliers to force them out?

A young educator from Hatchet Bay Eleuthera has passed…