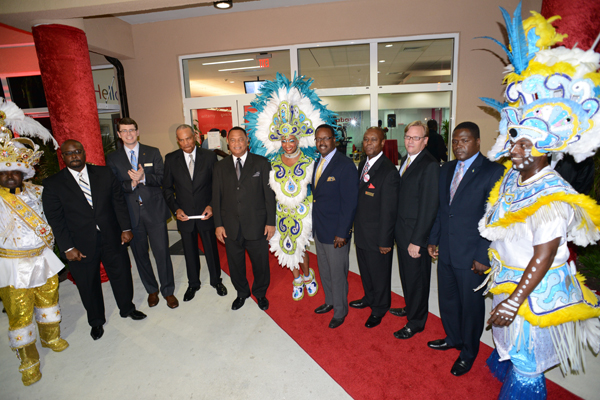 Prime Minister and Minister of Finance the Rt. Hon. Perry Christie, centre, cuts the ribbon at the official opening of the Carmichael Road Branch of Scotiabank, on January 16, 2013.

NASSAU, The Bahamas – Prime Minister and Minister of Finance the Rt. Hon. Perry Christie says the growth of S cotiabank as a financial institution in the country is a reflection of the stability of the Bahamian economy.

He was addressing the official opening ceremony of the Carmichael Road Branch of Scotiabank held Wednesday, January 16, 2013 in the area known as ‘City 2000’.

“We are here to mark another milestone for Scotiabank in The Bahamas – the consolidation of Scotiabank’s relationship with the fastest growing area of this island – Carmichael,” the Prime Minister said.

He observed that it is a whole new city, which is evolving where there is a major shift in population and also a major movement of business into the area.

“Indeed the establishment of this new branch in Carmichael at this time demonstrates that Scotiabank, one of our nation’s premier banking institutions, recognises the remarkable growth that is taking place in this area,” he said.

The Prime Minister also lauded Scotiabank for its cutting edge technology – being the first bank locally to launch a mobile banking app for the Blackberry and iPhone; and for appointing financial and legal experts James Smith and Sean McWeeney, respectively, as directors.

He said he imagine the bank would be involved in assisting residents in the area as the Government continues its plan to provide affordable homes in existing subdivision or new ones.

“Another thing that makes Scotiabank such an impressive institution in our country is its commitment to corporate responsibility in the broader social context,” the Prime Minister said.

He also recognised the bank for its community outreach programme through volunteerism, being a major sponsor to the Olympic trials last year and its “Bright Future Programme” which focuses on helping Bahamian children to further their education.

In this vein, the Prime Minister called on other corporate entities to become involved in the social development of the country.

Also involved in the opening ceremony were staff and students of schools in the area namely the Anatol Rodgers High School, Garvin Tynes Primary School and Gerald Cash Primary School. The official blessing was given by Bishop Ros Davis, of Golden Gates

It was the second bank the Prime Minister opened in as many months in the Carmichael Road area. The first being the FirstCaribbean Bank on December 12, 2012.