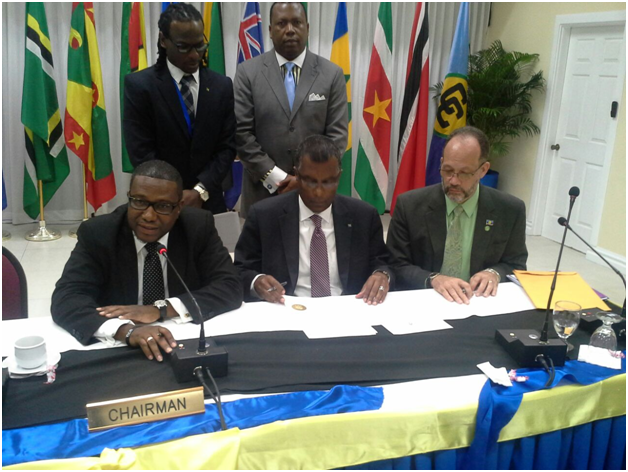 (Runaway Bay, Saint Lucia) – The Bahamas has now acceded to all three of the agreements which will facilitate the air passenger information system (APIS) which will allow the exchange of information to our border management agencies in advance of passengers getting on the plane to fly here. There were three agreements to allow this to be brought into force. Fred Mitchell MP and Minister of Foreign Affairs took the opportunity to sign the accession documents in Runway Bay, St. Lucia in the margins of the meeting of foreign ministers of Caricom on 22 May . The photo shows from left seated Alva Baptiste, the Minister of Foreign Affairs of St Lucia and Chair of the Foreign Minister’s Council (COFCOR) , Mr. Mitchell, Secretary General of Caricom Irwin Laroque and at the back Clifford Williams, Foreign services officer of The Bahamas and High Commissioner Picewell Forbes of The Bahamas. (Photo courtesy of CARICOM).