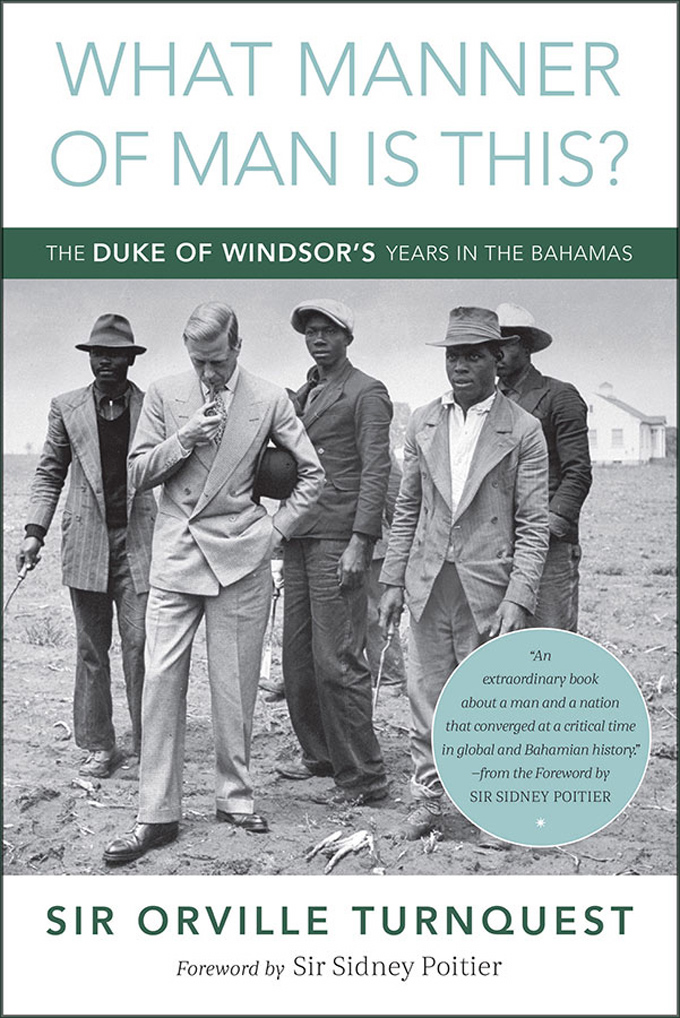 Fifteen years after former Governor General Sir Orville Turnquest pledged to dedicate his literacy prowess and fascination with history to writing the story of the Duke of Windsor’s reign in The Bahamas, his much-anticipated work, What Manner of Man is This, The Duke of Windsor’s Years in The Bahamas, will hit local bookstores on December 5. The book, now available in hardcover and paperback, will also be sold through online retailers shortly after publication in paperback and e-Book editions.

An official launch will be held at Government House with a small group of family, friends from The Bahamas Historical Society, Historic Bahamas Foundation and media. Sir Orville, who served as Governor General from 1995-2001, will present the first copy of the book to the current Governor General Lady Marguerite Pindling with a brief ceremony celebrating the book’s worldwide publication.

Although many books have been written about the royal couple, Sir Orville’s incisive book is the only one that focus exclusively on the Duke’s administration while Royal Governor of The Bahamas from 1940-1945 after he abdicated the throne as King of England in order to marry the twice-divorced Mrs. Wallis Simpson.

While the world reveled in what was portrayed as both one of the greatest love stories of all time and the scandal of the century, the reality for The Bahamas was that the Duke and Duchess of Windsor viewed his assignment as Royal Governor as severe punishment, banishment to a far-flung island country without any of the trappings of a royal life. Though they gave of themselves personally in times of crisis, they never truly warmed to the people of the island nation, nor did they reciprocate the warmth with which Bahamians showered them.

As World War II raged, disrupting lives globally including in The Bahamas, the Duke of Windsor was both symbolic of the superiority of royalty and symptomatic of the times. Turmoil surrounded his tenure in this island nation – the Burma Road Riots, the Bay Street Fire, The Project, The Contract and the still-unsolved murder of Sir Harry Oakes, the richest man in the world at the time.

The Duke’s friendship with a German industrialist who had taken refuge in The Bahamas during the war further aroused suspicion and, moreover, he never denied his affiliation and friendship with those who British allies would have considered their most bitter enemies. He also never entertained a black Bahamian at Mount Fitzwilliam (Government House), though black Bahamians were so excited to see the ‘romantic couple’ that they insisted on a ceremony at Clifford Park to welcome them to The Bahamas when only a private ceremony had been planned.

Diane Gedymin, publisher of Grant’s Town Press, states that, “This incisive book reveals the Duke and Duchess as racially biased, unwilling to disturb the status quo, and who fell far short of making a positive impact during his tenure.”

In the foreword, Sir Sidney Poitier calls the book “an unvarnished fresh look” at a crucial period in Bahamian history. He points out that the Duke and Duchess of Windsor’s time in The Bahamas was not unlike apartheid, and notes that although the term was never used, the foundation was there – economic and political rule by a white oligarchy.

Former Prime Minister Hubert Ingraham called the work “insightful, informative.” Turnquest, he said, “has produced an easy, readable history of the period, well-informed by his own personal experience as a young black, who overcame the absence of the opportunities gifted to the Duke of Windsor to become the Duke’s successor in the office of governor general of an independent Bahamas.” ­Other praise came from Tribune publisher Eileen Carron, two former Governors General Sir Arthur Foulkes and Dame Ivy Dumont and from Lyford Cay resident Harry Oakes.

The book will be available at all major book stores in New Providence, Grand Bahama, Harbour Island and Abaco as well as the National Art Gallery of The Bahamas and The Linen Shop on Bay Street, Nassau. The hardcover edition will be available at $35 and paperback for $25.20 and the eBook on Amazon.com, Barnes and Noble, iBooks and other eBook retailers worldwide. Publisher is Grant’s Town Press (www.grantstownpress.com).