Miami, FL – The Bahamian delegation that participated in the Susan G. Komen for the Cure Breast Cancer Walk in Miami this weekend came back with high hopes for their future as cancer survivors and for the fight against the disease.  The Sister Sister Breast Cancer Support Group was seven strong in the internationally-acclaimed Komen for the Cure race, which brought together breast cancer survivors and their families from all over the world.

For them, it was important for the Bahamas to participate, considering the alarming statistics as it related to breast cancer in the Bahamas.   A genetic screening of 200 Bahamian breast cancer survivors conducted by Dr. Judith Hurly, Dr. Theodore Turnquest and Dr. Devaughn Curling found that six founder mutations of the BRAC1 gene was found in 23 per cent of the Bahamian women with breast cancer.  This is the highest in any population thus far.  Researchers believe the high occurrence of breast cancer in our women may be somewhat attributed to BRAC1 mutations.  This also contributes to the aggressiveness of the disease. 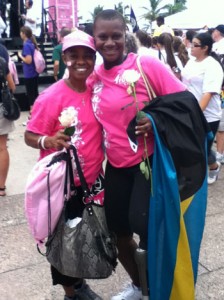 With these staggering statistics in mind, the Sister Sister group is on a mission not just to support and uplift men and women who were already diagnosed, but to enlighten the public on the importance of being tested.  Whereas American women would start having annual mammograms at age 40-45, Bahamian women are being told to start as early as 35.

Sharene Symonette, who was diagnosed just two months ago, was among the group who walked for a cure in Miami.  She said the trip made her realize just now much the disease is not a respecter of persons.  She met people of varying ages, racial, ethnic, social, religious and economic backgrounds.

“The trip was overwhelming,” she said.  “The support was so touching my heart got so full.  I started going through this ordeal 2 months ago.  I never cried; I just accepted the fact and decided I would take it head on.”

As we were walking up to the stage they gave us a rose – it was then that I started to cry.  People really do care.  They treated us so special.  They gave us medals just like they do in the marathons.  I was like ‘Lord, thank you for choosing me’.  I never asked him why he chose me but now, all I can say is thank you.” 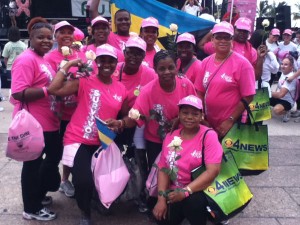 According to Sister Sister treasurer Shantel Hutchenson, it was very important for them to have Symonette, a newly-diagnosed breast cancer patient, attend the walk.  “It is moments like these that will help her travel the road ahead. I wish that every woman when first diagnosed with Breast Cancer could attend a Komen Race it would show them that they have the love and support of a global community helping them to fight breast cancer and win.”

Hutchenson added: “It is always an awesome experience to go to these events and feel the power of love and support. Thousands of women from every walk of life gather together with one thing in common…we all have battled cancer and are surviving! We are supported by family, friends and strangers…all cheering us on as we wave our roses, cry, hug and sing.”

Sister Sister has been busy during breast cancer awareness month conducting a series of talks, including the schools, teaching people vital information about breast cancer, and how to conduct personal self-examinations.