Airline must be GROUNDED before the UNTHINKABLE OCCURS!!!

Marsh Harbour, Abaco –– When Bahamas Press warned aviation authorities of the dangers we believed were unfolding at the local airline here in the capital, no one listened!

Just a few years back a Sky Bahamas Airline aircraft was parked on the tarmac near the domestic section, and guess what, the front landing gear collapsed and the plane took a nose dive.

At the time, only Bahamas Press alerted authorities that something was wrong. At the time, we warned the Bahamas Government to quickly take preventive action before some national disaster occurred and lives were lost.

Back then, we had good and valid reasons to believe the airline was not being properly serviced and maintained, but we wanted to give the company a chance.

Earlier this year, Llewellyn Boyer-Cartwright, the Callenders & Co attorney and partner, warned that, if the Federal Aviation Administration (FAA) downgraded the Bahamas from a Category One to Category Two status following its upcoming May 13 inspection, the economic impact would be “immediate”. IMMEDIATE!

The last FAA inspection noted that the Bahamas had the worst aviation safety regime in the entire Americas’ region. IN THE REGION!

The Minister for Transport and Aviation, Hon. Glenys Hanna-Martin, told the House just last week there are serious problems facing the Bahamas in Aviation.

And as the Minister stood on her feet in Parliament last Wednesday, she tabled the Civil Aviation Safety Amendment Regulations 2013 in the House of Assembly and noted that, in 2009 and 2011, The Bahamas failed two tests conducted by ICAO.

She explained that the tests addressed various components of the country’s safety regime, including general policies, penalties, airworthiness, aviation maintenance, licences and training and certification, among other areas.

According to Minister Hanna-Martin, in the 2009 audit, The Bahamas was found to have a number of deficiencies based on the eight critical elements established by ICAO to monitor member states’ commitment to ensuring that a safe, secure aviation regime is in place. And while the minister is repairing all the problems of the past, Bahamas Press is warning the government that it must do more to protect Bahamians before some unforeseen tragedy occurs – GOD FORBID!

Today, Bahamas Press will reveal what no other member of the media will, and as we do so now, we call on the Christie Government to begin a nation wide inspection on all aircraft entering and leaving The Bahamas.

This past week, one airline has dominated the headlines – Sky Bahamas. On Thursday afternoon, an inbound Sky Bahamas flight into the Marsh Harbour Airport bounced three times while landing on the wet runway, forcing – on the third bounce – a left gear to snap as the aircraft slid off the runway.

The passengers were not harmed while rescue workers and fire fighters extinguished a blaze in one of the engines. And, if that incident was not enough, Saturday events involving this airline tell us something is seriously wrong.

When attempting to take off from the same airport in Marsh Harbour, another Sky Bahamas aircraft engine caught fire. The plane aborted its takeoff and the passengers were evacuated.

Now if these incidents are not enough to warn the Bahamas Government of the problems of safety on this fleet – here’s more.

After serious inquiries were made in the United States by our media partners, we opened a MSNBC type investigative report on Sky Bahamas and what we uncovered is indeed shocking.

Three damming letters from the Federal Aviation Administration [FAA] have cited serious infractions by the airline, noting dangerous maintenance issues with its fleet of aircrafts.

In a letters penned to Captain Randy Butler, the FAA warned that during ramp inspections carried out at its field offices in Fort Lauderdale and in Miami lists of violations were discovered that were contrary to the FAA Regulations.

“…Inspection at Fort Lauderdale International Airport on August 31, 2012, on Sky Bahamas Airlines Limited, Saab 340 with registration number C6-SBJ, a SF-349-A aircraft, and serial number 110. The following is a list of maintenance discrepancies found during the inspection”

WHAT IN THE HELL!

According to a professional pilot of more than 30 years who has flown around the world many times, “This is a serious revelation that should concern not only the FAA, but the Government of the Bahamas who proffers the license for the airline. These two recent incidents in less than a week are most alarming, and are an indication that the safety and maintenance standards of this airline is not being maintained.”

Bahamas Press notes that our findings, combined with the letters attached below, are most disturbing, and again we wonder where in the hell is da WUTLESS media in the Bahamas on this. All week ZNS, the Tribune, the Guardian and all 16-plus radio stations across the country has been drunk with the promotions of Loretta Butler Turner’s ‘vicked’ slap down of Andre Rollins – but we at Bahamas Press have placed our investigative team to work! One must wonder, who are the real watchdogs in this country when it comes to the safety of the Bahamian people. 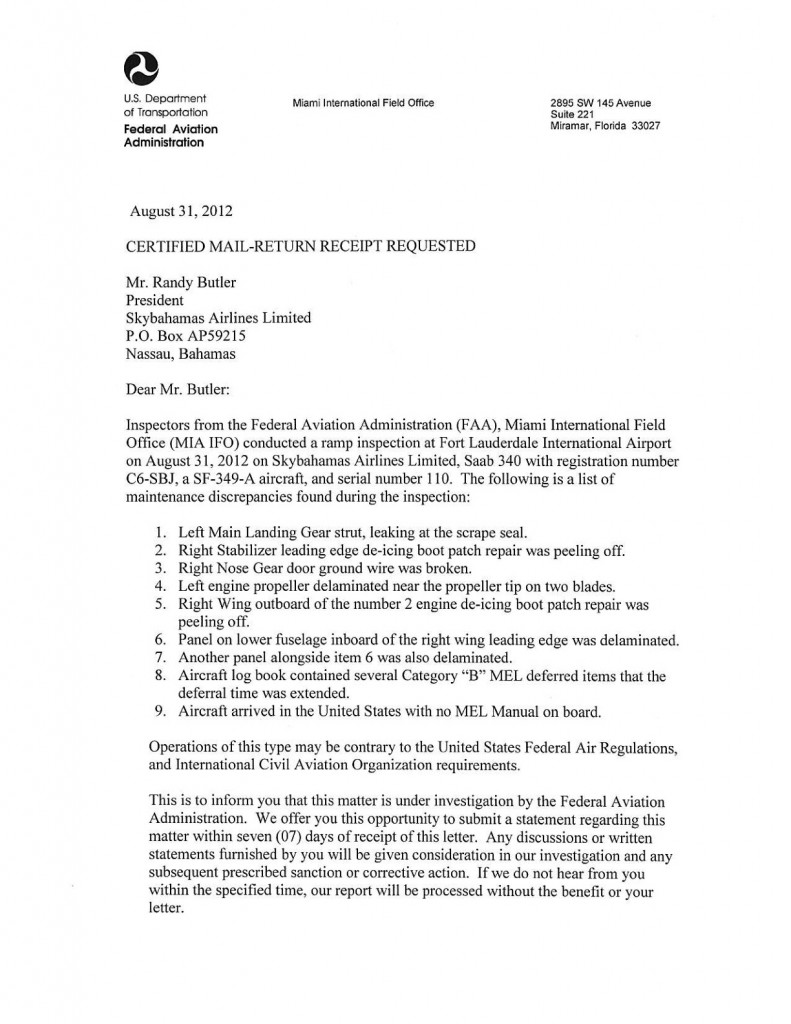 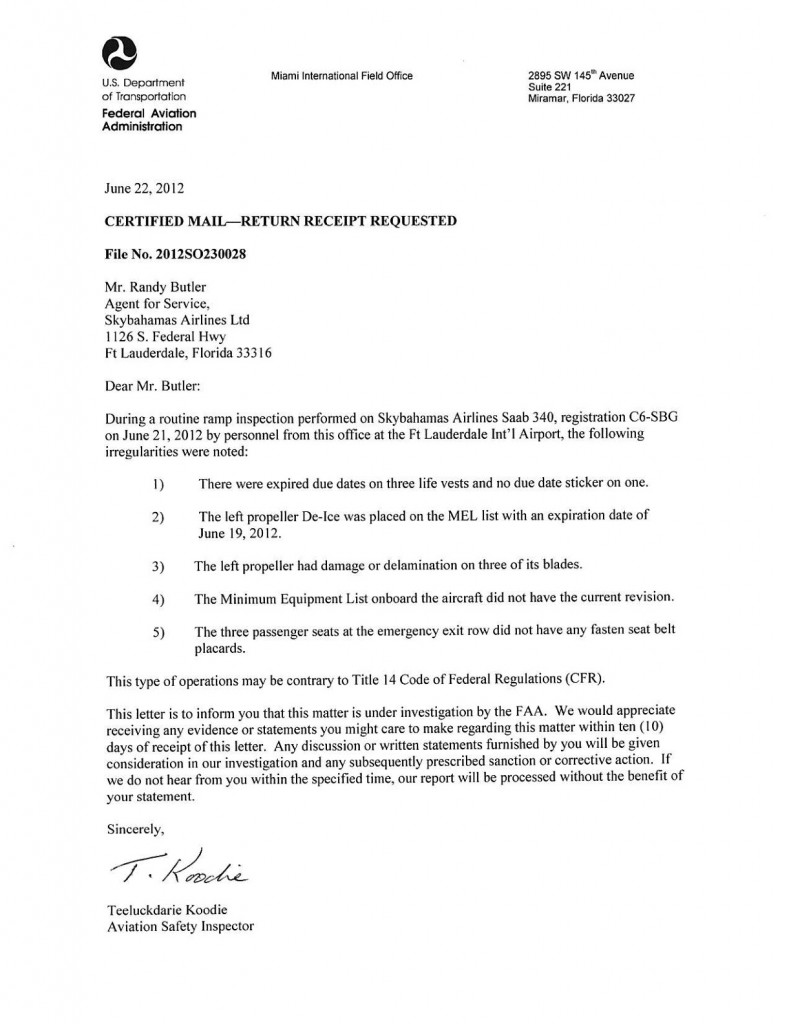 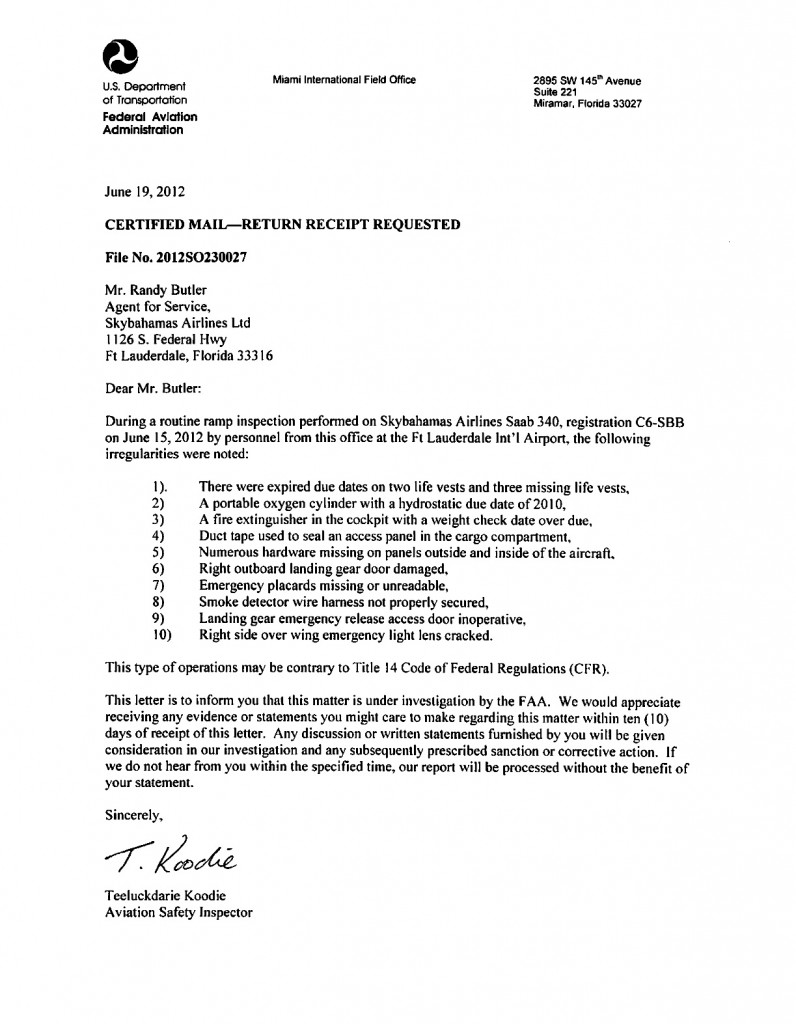