Bimini Residents should run the BNT off the island for trying to take bread out of their mouth!

Nassau, Bahamas — The Minister of Labour, National Insurance and Public Service, the Honourable D. Shane Gibson recently announced in the House of Assembly on Wednesday, 2 October 2013, that Resorts World Bimini, the new luxurious, resort on the island of Bimini would be hiring, “an additional 300 persons by mid- December 2013, thereby increasing its staff to more than 800 persons.” The luxurious resort features beach front villas, multiple restaurants, shopping, gym, swimming pools and state of the art casinos supported by the new Bimini SuperFast cruise ship.

Minister Gibson also stated that in addition to the new hirings, Resorts World Bimini, is expected to employ some 552 construction workers during the construction of Phase II.

While addressing the House of Assembly, Minister Gibson stated that, “These jobs are ready today, Mr. Speaker. Resorts World Bimini will provide suitable housing for construction workers as well as the 300 new employees that will be hired by mid December 2013.” Continuing, he added, “This is progress, Mr. Speaker, and the people of Bimini and indeed the wider Bahamas will be positively impacted under a PLP Government.”

Minister Gibson encouraged job seekers to contact the Bahamas Employment Exchange in New Providence and the other Family Islands and to register their skills, which he noted would assist his Ministry with recommending qualified, available persons to fill job vacancies.

The Labour, National Insurance and Public Service Minister further stated, “Mr. Speaker, the Perry Christie led Government is committed to putting Bahamians first and has taken a policy decision that Labour Certificates from the Department of Labour and Work Permits from the Department of Immigration would only be granted, in cases, where the Government is satisfied that there is no Bahamian and, I repeat, there is no Bahamian available to fill the vacancy.”

To assist with these new developments, Minister Gibson also announced that a much needed upgrade would be conducted on the Department of Labour Office in Bailey Town, Bimini.

“We in the Ministry of Labour & National Insurance, Mr. Speaker, are committed to improving the quality of service delivered to the people of Bimini and Cat Cay and, to this end, the Government of The Bahamas has made the decision to upgrade the Department’s office in Bailey Town as a matter of priority and urgency,” stated Minister Gibson.

The upgrade, according to Minister Gibson, would include the relocation of the office to new premises: an increase in manpower in the Department by assigning a Labour Officer, an Assistant Labour Officer, a Clerk and a janitor/ janitress: the upgrade to equipment including computers, accessories and furniture and the purchase of adequate ground transportation.

Minister Gibson reiterated that the upgrading of the office of the Department of Labour is not only necessary, but is an excellent example of good governance as the Government, in anticipation of an increase in the demand services especially labour and industrial conciliation, prepares for the timely and efficient processing of labour matters including labour certificates. It is anticipated that these will be required on an accelerated basis as Resorts World Bimini increases its investment activities from which there should spring direct and indirect spin-off businesses resulting in job creation opportunities in Bimini.

In conclusion, Minister Gibson affirmed the commitment of the Progressive Liberal Party Government led by the Rt. Hon. Perry G. Christie to put Bahamians first. He predicted that the Resorts World Bimini project and the response of the Government to providing the necessary services is only a small example of the great things ahead for the Commonwealth of The Bahamas. 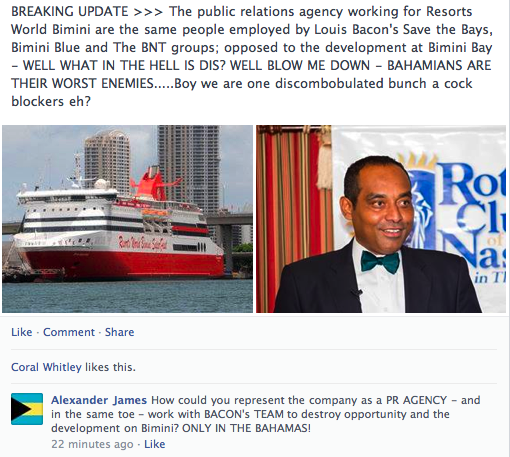