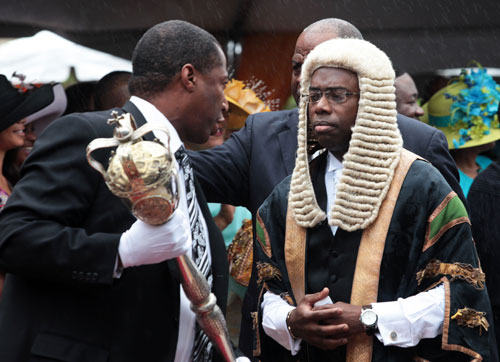 The following remarks and summation came from a video located here: http://vimeo.com/46368920

The Chair announced that a letter was received from the Member of North Abaco on July 19 2012. The speaker made the following remarks:

“According to our existing rules and procedures section 9 Subsection 1,  speaks to a member who proposes to resign his seat . Upon presenting written statement to that effect, then that member should be allowed to make that statement to the house as soon as possible for the next seating date after it has been received.

Subsection 2 continues that the resignation of the member should be the first order of the day after the next seating day for the House of Parliament.

The letter reads as thus

I hereby tender my resignation as a member of House of Assembly effective as of August 31 2012.

During my meeting with the Rignt  Honourable Member,  a request was made that he be given the opportunity to make a statement surrounding his required resignation.”

The Speaker went on further to say;

“It is therefore the considered view of the Chair the the communication ostensibly a resignation letter, is in fact a promissory note a resignation will take place sometime in the future. Accordingly, the chair is not minded to prioritize a personal statement of the Right Honorable member for North Abaco as prescribed by ruling.”  He stated,”  I will allow, with agreement from both sides , the member to make a personal statement at item J of the order of business which speaks to the motion for leave of absence, leave to resign seat… ”