Nassau, Bahamas — In life there are some things that are ugly and the findings in this article are no different – our findings are ugly, stinking, rotten to the core and downright dishonest! Bahamas Press, once again, is deep in the bowels of the Ministry of Health and this time we are knocking on the door of the technocrats.

A senior public officer in the department is now under investigation in what we can only describe as: ‘THEFT BY REASON OF EMPLOYMENT’. Get this:

The government of the Bahamas issued a new 2009 Malibu for the Ministry of Health.  It was assigned to a high-ranking officer to ride around in. But the ride was so soft and enjoyable, the officer decided the car should be kept home for her own enjoyment.

And so, to the surprise of BP’s investigative team, we have uncovered a war chest of receipts.

We found receipts applied to the Government account of Nassau Motor Company [NMC] in the thousands in claimed repairs on the 2009 luxury sedan – [Some we have posted below for your review [FREEDOM OF INFORMATION]]. We understand the senior government officer racked up the bill at NMC, then, with the assistance of another officer in the government, worked a deal to allow that same Malibu luxury sedan to be purchased by her, without the asset being offered for public tender.

Evidence shown to us confirmed some $4,000 was “borrowed” from the department account [MOH] by the senior officer to purchase the damn car for himself. WHAT IN THE HELL IS DIS?

The real value of the Malibu at the time of sale, according to car dealers, stood at around $15,000, yet the senior officer [who we believe stole the public car] sold it to herself for $4,000! Now if that ain’t a thief, then yinner please tell me what it is?

We understand a Cabinet Paper has been issued on the matter, and sources deep in the department tell us an option has been placed on the table. We, however, have one conclusion in this: the public officer is to return the public’s Malibu IMMEDIATELY…and then be FIRED FROM THE PUBLIC SERVICE WITH IMMEDIATE EFFECT from the Ministry of Health forthwith! YOU CANNOT HAVE THIEVES WATCHING THE DAMN COOKIE JAR!!!!

It is amazing when things like this occur not a damn word is heard in the press or from the opposition…We wonder why? Perhaps this is normal behaviour for them! MUMS DA WORD!

BP is live looking out for the PEOPLE’S ASSETS!

SHOWN BELOW ARE INVOICES RACKED UP IN JUST MONTHS BEFORE THE VEHICLE WAS SOLD! 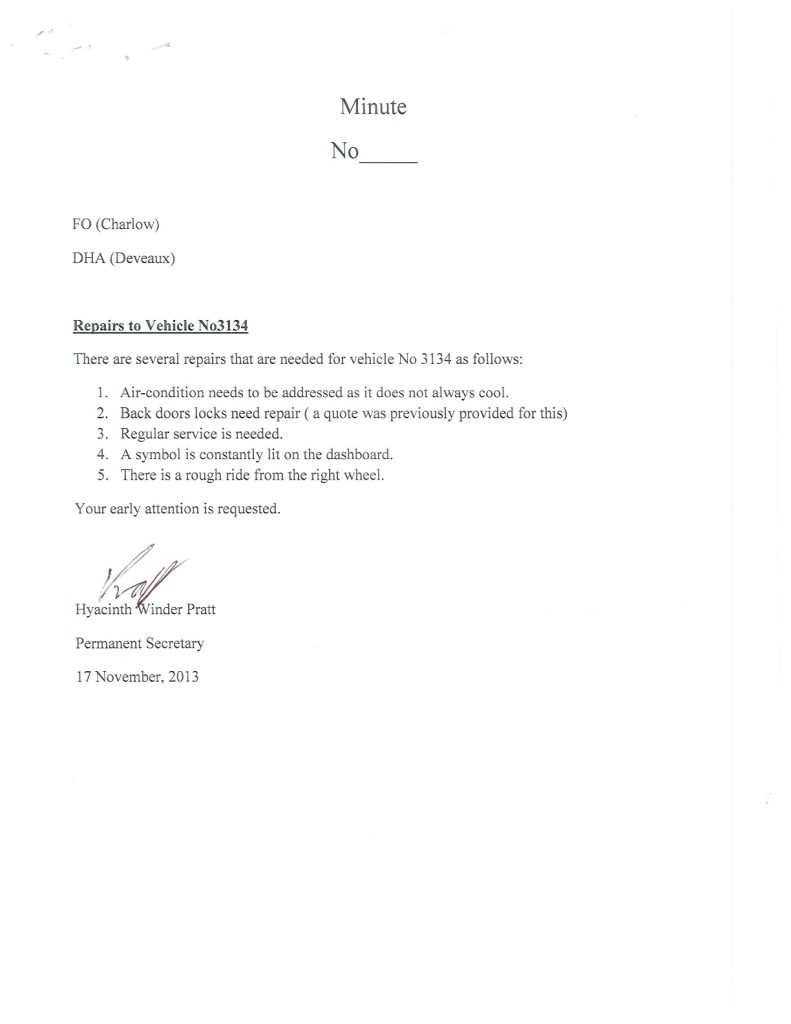 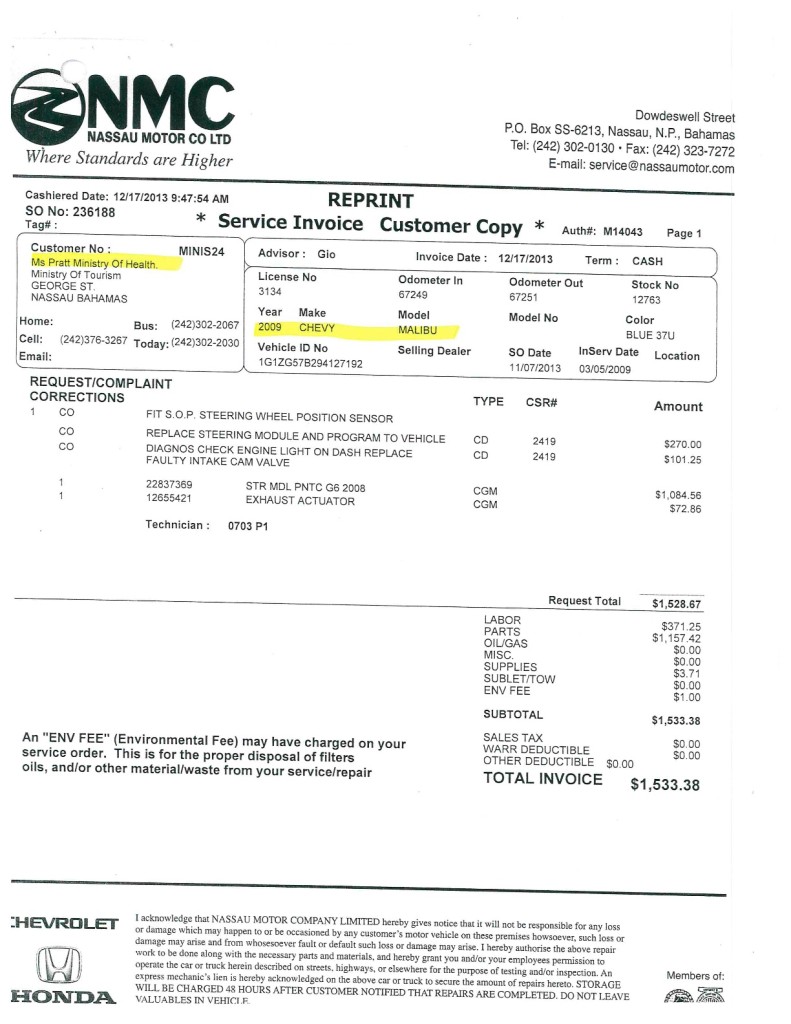 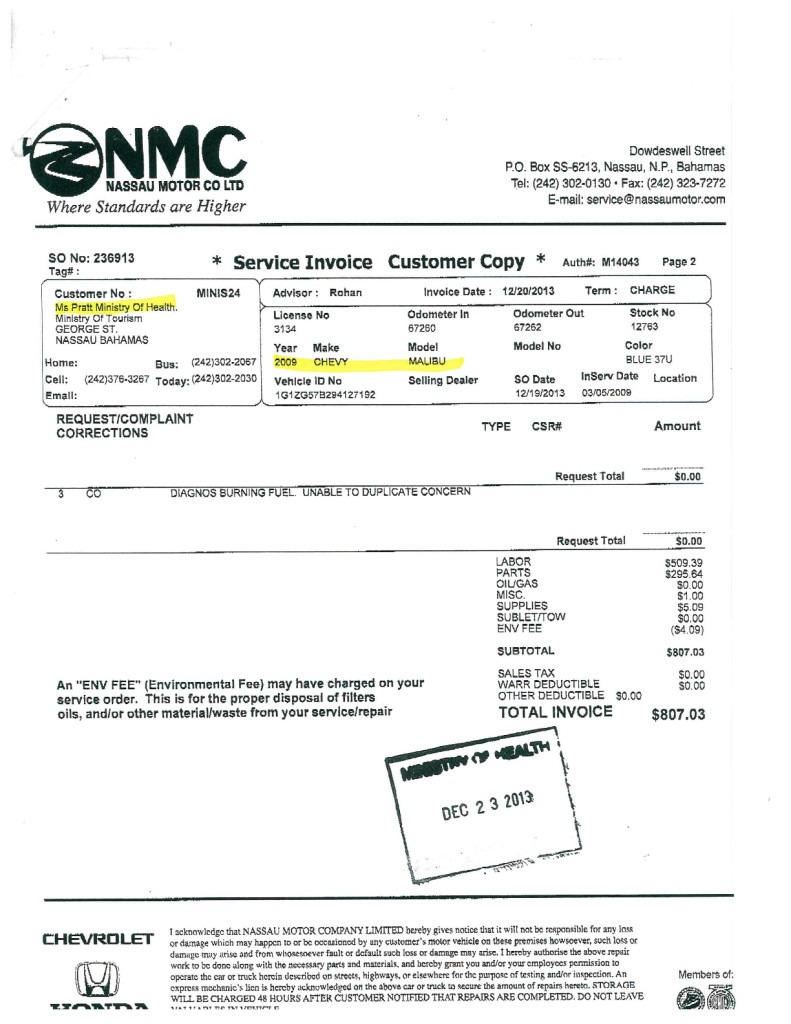 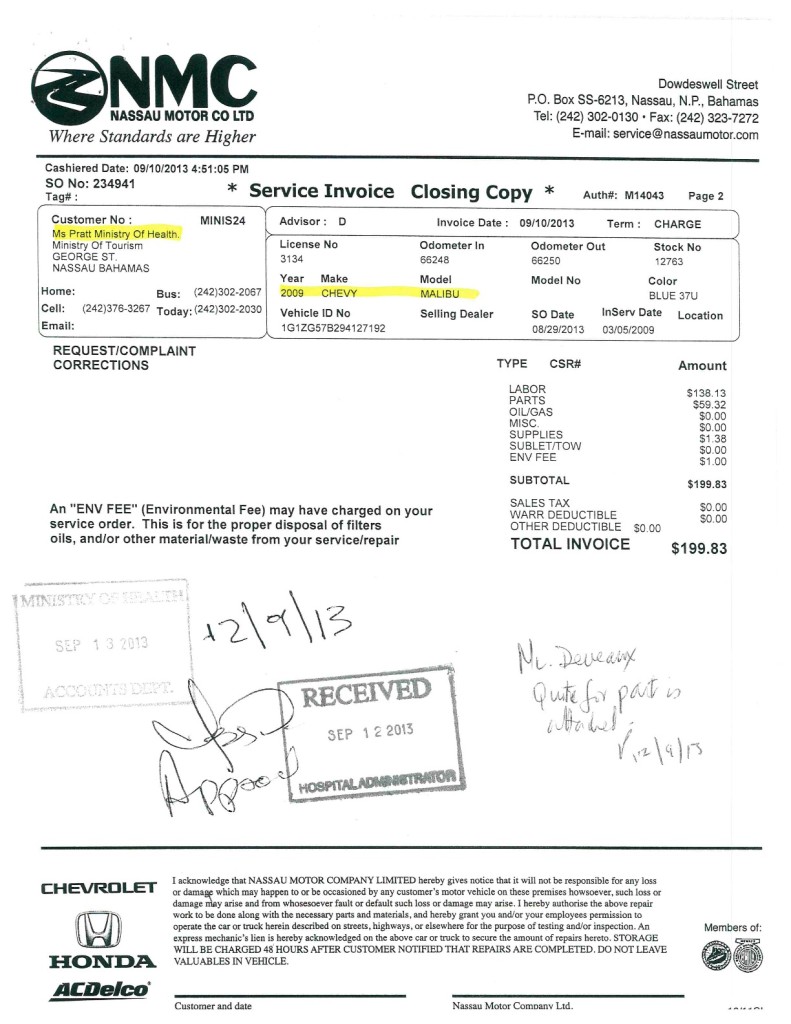 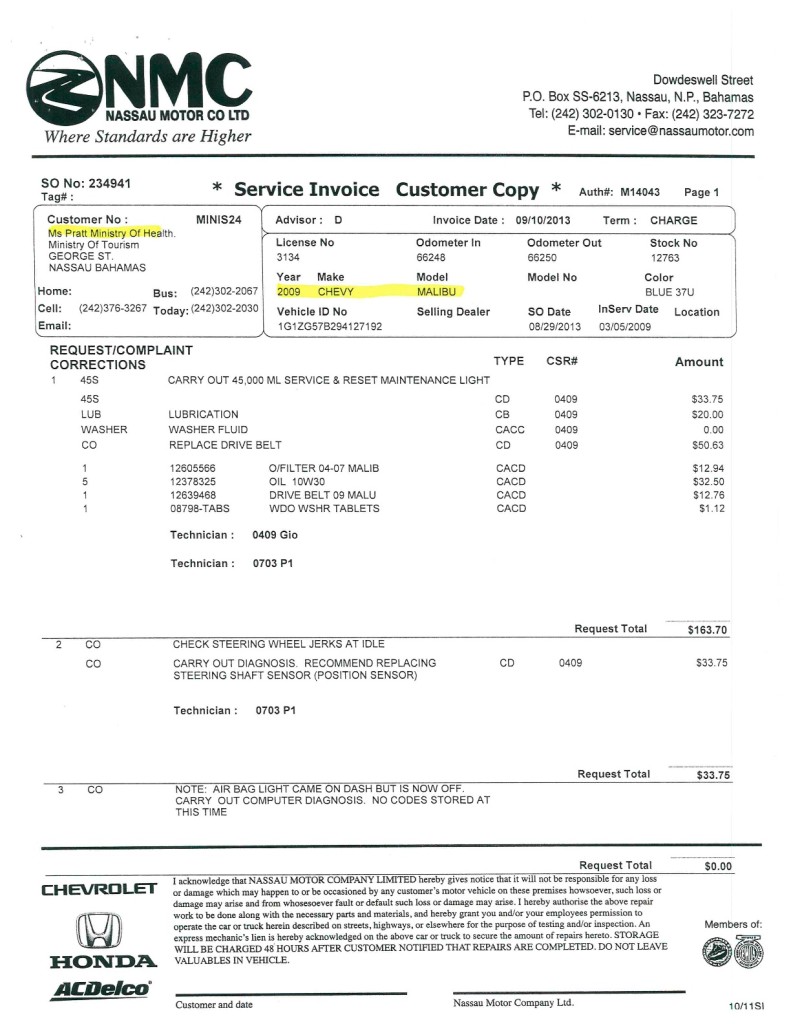 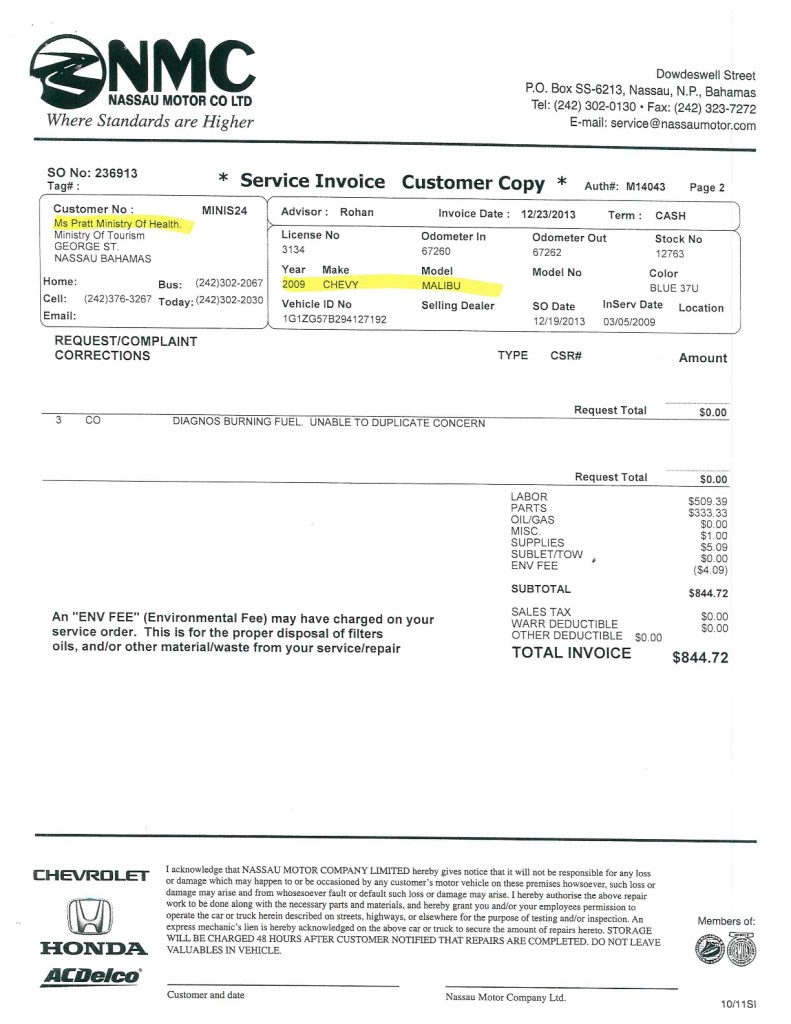 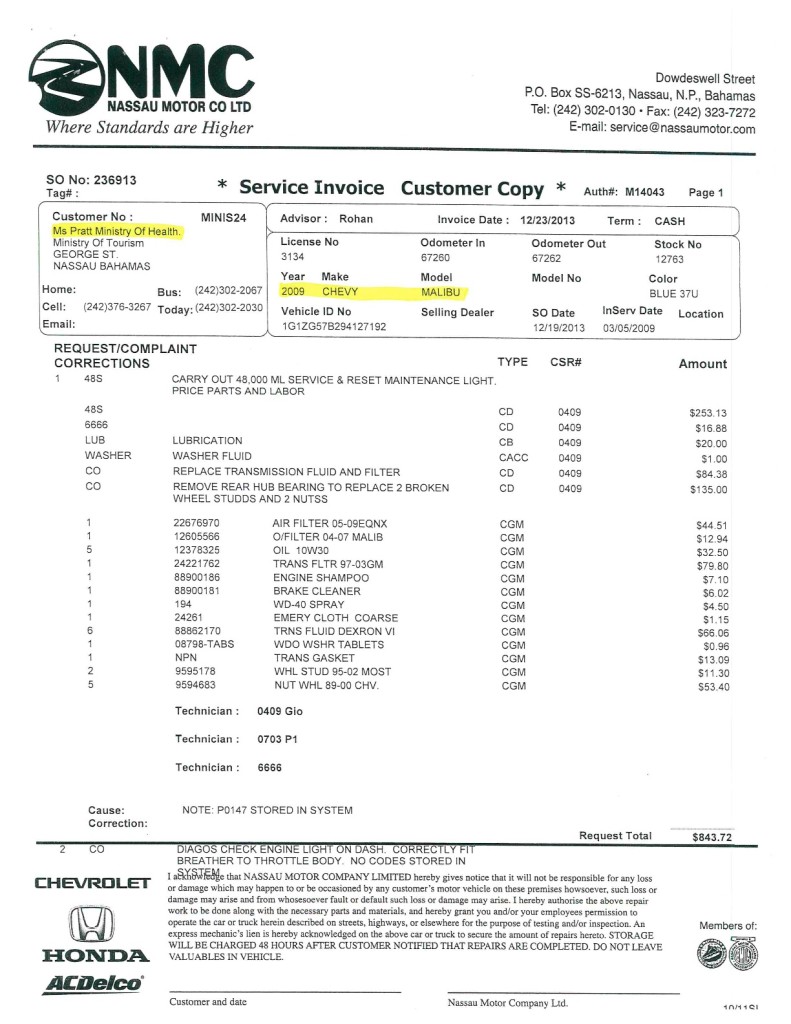 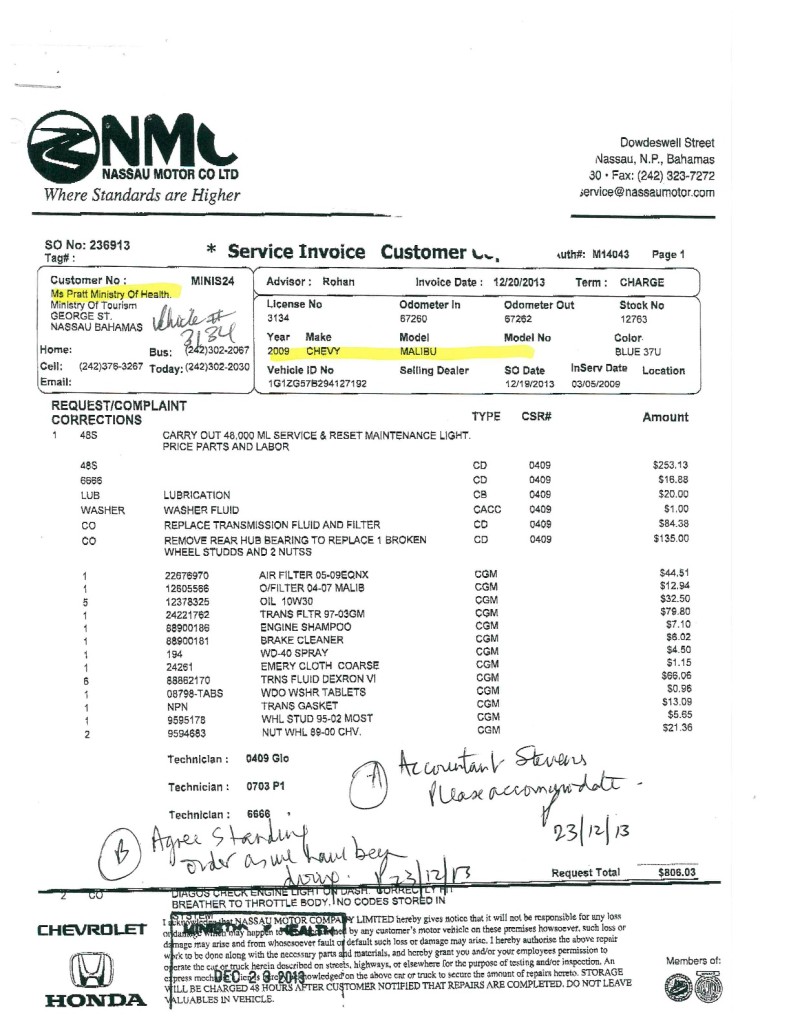 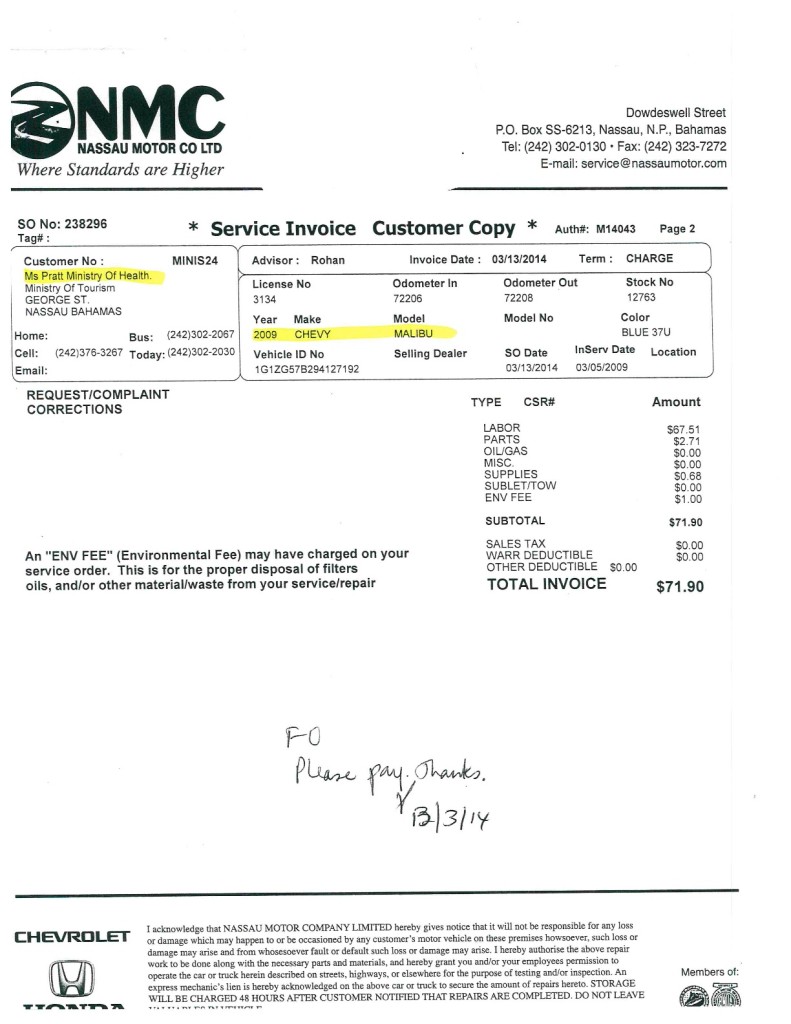 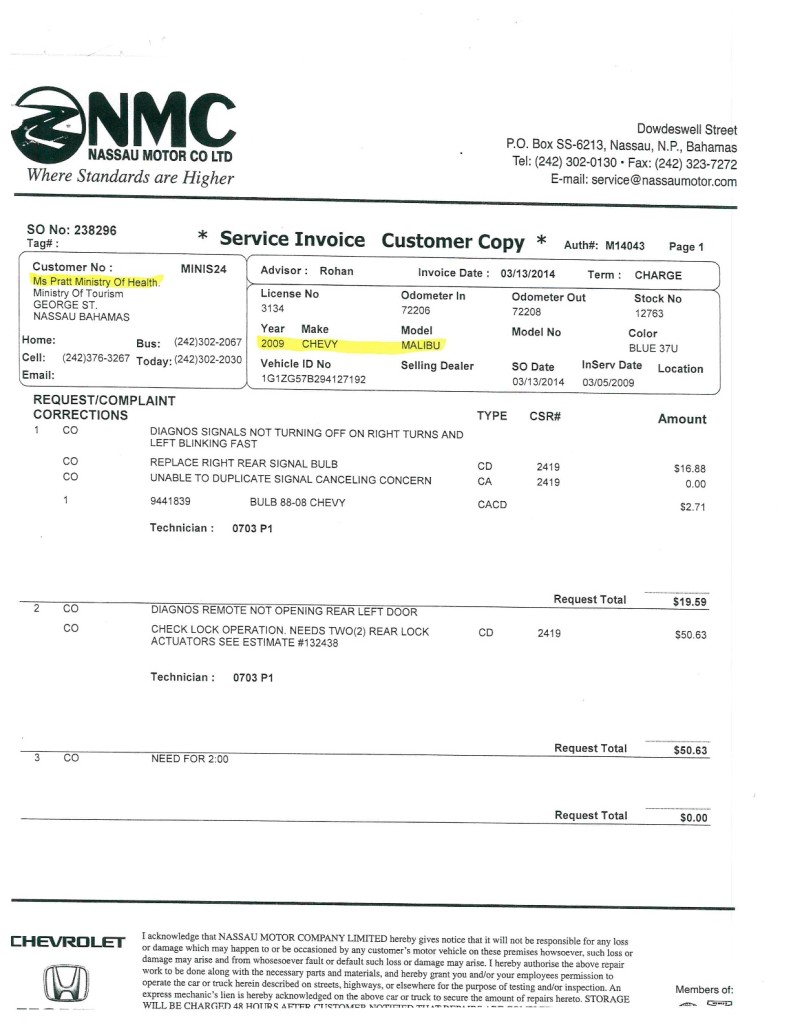