He explained how economic expansiveness has as a key factor the role of local government, stating: “I went into work this morning and I have not stopped, just continuous meetings, working through lunch, working through a lunch I didn’t have, but meetings that are all sort of dove-tailing into what is good for The Bahamas; meetings entailing development and entailing regulation, involving islands of The Bahamas, and in fact involving yourselves.”

He said their level of responsibility in a nation of islands was profound, whether as elected representatives or administrators. It was important that they knew The Bahamas and the island communities well in order to fulfill their roles and participate in growth.

“Just as I am able to walk you through every development in The Bahamas and [see the] implications from Bimini, right down to Ragged Island, where we propose to build a military base at Gun Point; to Mayaguana, where we are proposing something there…[in sum]to let you know the importance of the position that you have…” said Prime Minister Christie.

He explained that he was recently in a meeting concerning the further expansion of Bimini, which requires a balanced decision with respect to environmental protection and development.

“The whole prospect of a Government being represented by yourselves, at the local level, is very important to us, because at the end of the day, the Bahamian people must participate in the decision making in one form or another, that is taking place.”

Mr. Christie introduced participants to the principle of Buoyancy Leadership, which is leading at the pace of followers, so as to not overwhelm people with change.

He said the Privy Council, in a certain case, opined that Governments should consult the people of their country, particularly people who are located in remote parts of the country, so as to ensure that they are made aware of what is being imposed and are able to participate and convey their thoughts to authorities.

Continuing, he said: “The Government of The Bahamas through my government have agreed on a particular set of developments by a group called the ‘ I-Group’, in Mayaguana, which at the time that I was last Prime Minister, had 274 people living on the island.

“This massive development we proposed by way of joint ventures, so we could control the pace of development and the extent to which the developers were able to carry the population, because we know the people are never to be taken faster than their capacity to endure what is taking place.” 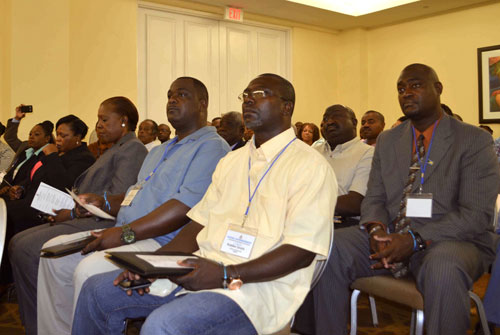