AND WE GA SUE YOU FOR ALL OUR MONEY!!! 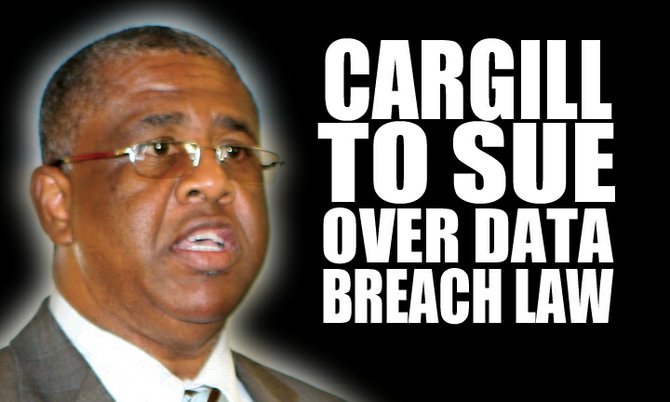 ALGERNON Cargill, the suspended Director of the National Insurance Board (NIB), has instructed his attorney Alfred Sears to make a formal complaint on his behalf with the Data Commissioner after more of his personal NIB information was leaked on the internet over the weekend.

According to Mr Cargill’s attorney, the Data Commissioner, George Rodgers will then instruct the police to carry out a forensic investigation to determine the source of the leak; as such breeches of the Data Protection Act could carry a fine of up to $100,000.

Minister of Labour Shane Gibson yesterday announced that his ministry has commenced an internal probe into how confidential documents, including financial records detailing Mr Cargill’s salary and the benefits received by him and seven other executives were made public.

“We are doing an investigation in trying to determine how the information was leaked, why, because I think it’s wrong,” Mr Gibson said.

Bonuses awarded to eight NIB senior executives and a contracted worker over a three-year period were made public last week. According to the information, which was also posted on a tabloid website, executives were awarded a total sum of $723,333 in six payments. The information has incited speculation over the legitimacy of bonuses awarded to Mr Cargill, who was alleged to have received just under $200,000 in bonuses during that period.

The corporation has been embroiled in controversy, after allegations made by chairman Greg Moss concerning Mr Cargill’s performance at NIB were leaked last month. In response to the leak, Mr Cargill filed a writ with the Supreme Court against the Board and Mr Moss, claiming that the allegations were untrue and defamatory. Following this, Prime Minister Perry Christie ordered a forensic audit be conducted at the $1.6 billion corporation to determine whether or not any action should be taken in the debacle.

Recurring breaches of confidentiality at the executive level of the National Insurance Board has left board directors stumped, according to deputy chairman Bernard Evans, who speculated that the leak may have come from persons involved in conducting a forensic audit at the quasi-government corporation.

According to Grant Thornton Bahamas, the firm contracted to conduct the forensic audit into allegations of impropriety and misuse of funds at the National Insurance Board, the report will be completed and presented to the government within the first week of January. However, yesterday, Prime Minister Perry Christie said the report could be completed as early as next week.

Unlike the salaries and related benefits received by public officers such as himself, Mr Gibson said that quasi-government agencies were afforded privacy under the law. However, he suggested that a group of independent persons could be appointed to review such matters and make determinations on whether or not the information should be released to the press and to what extent.

“I’m not going to be discussing anybody’s salaries in the press. I won’t do it privately and I won’t do it publicly I will execute my duties in accordance with the National Insurance Act.

“Even though it’s public money, have you ever heard anybody discuss how much executives at the (Bahamas Electricity Corporation) makes, or the (Bahamas Telecommunications Company) or Water and Sewerage or ZNS? Have you ever seen that?

Mr Gibson added: “If the framers of our constitution wanted it to be so they would have included it in the constitution that the salaries of quasi-government entities would be published as well. But the fact is that it was never done, I see no reason for me to start it now.”