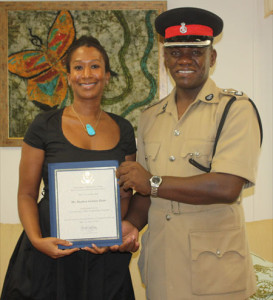 Nassau, Bahamas – On June 16, 2011, U.S. Ambassador Avant met with renowned journalist Francisco “Paco” Nunez and Superintendent Stephen Dean after their successful completion of their respective International Visitor Leadership Programs in the United States. Mr. Nunez participated in “U.S. Foreign Policy: The Decision Making Process” from May 7 to May 20th, whereas Superintendent Dean participated in a program specifically designed for law enforcement leaders from throughout the region entitled “Caribbean Basin Security Initiative (CBSI): Community Policing” from May 14 to June 3. Both had the opportunity to meet with their professional peers and exchange ideas that would serve them long after they returned from the program.

The U.S. Department of State funds and administers the International Visitor Leadership Program and it is one of the premier U.S government sponsored professional exchange programs. Leaders from around the world travel to the United States on multi-week, multi-city programs to confer with their professional counterparts on critical transnational issues. The program also provides a forum where leaders can exchange ideas and share best practices that can be replicated when they return home.

Mr. Nunez’s two-week program opened in Washington, D.C. on May 7 and included visits to Tallahassee and San Francisco. Mr. Nunez met with other leaders representing Brazil, Costa Rica, India, Israel, China and Slovenia. The Washington visit served as the foundation for understanding the intricacies of the U.S. political system and included meetings at the U.S. State Department and with members of the U.S. Congress. The program offered participants the perspective of decision-making on the federal level as well as how foreign policy is shaped through the interaction of key stakeholders. According to Mr. Nunez having the opportunity to meet with and openly debate top leaders and average Americans about the international issues really changed his perspective about the U.S.

“I learned through this experience that foreign policy is a very democratic process and I am glad Americans let me see who they really are and how the system works,” said Mr. Nunez. 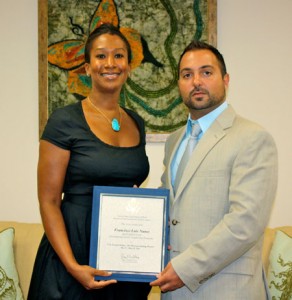 It was through the program that Superintendent Dean learned how neighboring countries in the Caribbean are dealing with similar law enforcement issues. He said that he plans to utilize his new network and knowledge to strengthen community-policing programs that are currently in place here in The Bahamas and deepen the RBPF’s ties with local community-based organizations.

“This program really showed me that there is power in the community and the problems in my nation are shared by my neighbors and in the U.S.” said Superintendent Dean. “We can and should look to each other for ways to fix them.”