And while Earl Deveaux was up and down, riding in a luxury helicopter and issuing dredging permits, Bahamians were paying exorbitant monthly light bills.

Millions of dollars have vanished from BEC and today not a damn FNM IS TALKING!

Evidence of this fact came out of the financial secretary’s office in the Ministry of Finance.

BP has obtained copies of a communication passed on to the attention of the General Manager of BEC, Mr. Kevin Basden.

In it, we are informed that BEC owes the Bahamas Government more than 180 million dollars in custom duties. Now get this –

BEC is charging the Bahamian people a tax for fuel that is to be paid into the treasury. From our documents, the money was paid by the public to BEC in high electricity bills that were doubled since 2007. In actual fact, some in the Corporation tell us the money has vanished under the FNM with no accounting whatsoever. WHAT IS THIS?

Some also believe the information now being leaked to Bahamas Press was why Hubert Ingraham said on national TV he blamed the PLP for the state of BEC. But Ingraham has been in power for the past 5 years and for the past 15 of the last 20 has overseen the decay of BEC.

Could BEC be next up for sale? YA NEVER KNOW!

But we will say this: THE FNM could be working on it!

Bahamians need not apply, and boy when you see the letter below, if you don’t laugh you will cry. 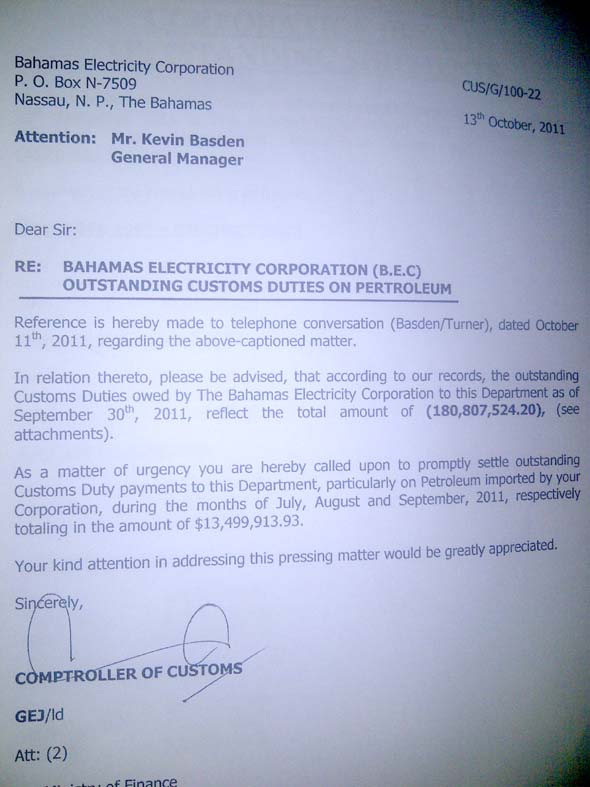