Nassau, Bahamas — Bishop Neil C. Ellis told Cable 12 news, the partner company of the Nassau Guardian, that the information revealed by Wikileaks is a boldfaced lie, and that he never owned a rolex watch as the cables suggests.

Today the Nassau Guardian editorial suggested Bahamians should take the cable releases in the paper as serious and should allow it to formulate their election decisions.

We wonder why the paper saw the need this morning to sell its own releases to us, by telling us what we should form an opinion from. Bahamians are intelligent people. It is the ignorant who cannot read, and editors of the morning daily should be concern about them, not us.

Bahamians, the Guardian and its editors should note, we are not concerned with whatever is released in the cables as it is riddled with CONJECTURE and CONCLUSIONS OF SOME who remain nameless in the paper columns! SO WHAT IF THE AMERICANS HAVE AN OPINION OF US, SO WHAT?

In fact we at Bahamas Press have held the view from the beginning that the cables reflect the opinion of a foreign country, which itself at times have been found in a political quagmire when dealing with issues around the world.

Bahamians know Perry Christie and Hubert Ingraham. We know our politicians. Additionally, we know for years there have been agents in this country who LEAK information to others around the world; just ask Eileen Carron and she would tell more.

We have known from the drug years of the 80s there have been many influences and forces from around the world meddling in our affairs and have sought to stand bold-naked in our bedroom. This is not news. 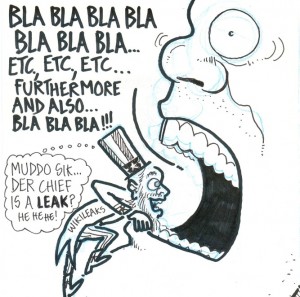 What Bahamas Press finds incredibly shocking and equally striking about the wikileaks is this; The Guardian Editors sought Christie’s opinion, they sought Neil Ellis’ opinion, and they have called up Reginald Ferguson and Cassius Stuart wanting to know what they thought about the articles. However, what remains to be seen here is this; when will one writer of the cables [IF THEY ARE INDEED WRITING THEM], find the gall or the gumption to telephone Hubert Ingraham and ask his own opinions on the WIKILEAKS! Its he above review? Perhaps the Guardian should tell us. Never in any of their articles have they even written where they attempted to call PAPA, or confirm in writing that they were unsuccessful in reaching him! WHAT SHAMEFUL WAYS TO HAVE!

The articles have been running for weeks now, and still the Guardian cannot get one response from the man at the centre of them – AGENT #1622, Hubert Ingraham.

Yet they want us to take them serious? PLEASE!

Another thing to interest to note is this. For its Wikileaks revelations, the Cabinet Office directed by Prime Minister Hubert Ingraham, has granted the morning daily a huge contract to print nomination papers for the upcoming local government elections. WHAT A PAYBACK FROM PAPA HIMSELF! We thought you should make a note of this.

Yet they want us to take them serious? PLEASE!