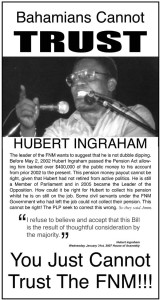 THE PROGRESSIVE LIBERAL PARTY
PLP GETS ITS HANDS ON THE M.O.U. IN DRAFT
18th January 2010

The Progressive Liberal Party has been supplied through an anonymous source the Memorandum of Understanding that the government signed with Cable and Wireless to sell Bahamas Telecommunications Company Ltd. (BTC).  While several paragraphs as missing from the copy supplied to the PLP and it is unsigned, the PLP believes that it represents what the government intends to do in the sale of BTC.  It confirms the view that the government is giving away BTC at a fire sale and in exchange has pledged Cable and Wireless to secrecy.

We are hereby making available to the press and the public copies of what we have and we demand that the government in the sunshine forthwith publish the entire Memorandum of Understanding and disclose fully all the terms of this secret sweetheart deal.

The PLP is concerned about a number of the provisions in the document.

1. The consideration of $210,000,000 is too little and is a fire sale price for our national asset.  The government has agreed to leave 15 million dollars sitting in the kitty for Cable and Wireless (1.2.1)

2. The voluntary reduction of the work force. By looking at these provisions, it is clear that the first order of Cable and Wireless once it buys the company will be to downsize the staff.  We do not think that the promise of the workforce reductions is voluntary; it is a euphemism for firing people.  The FNM government agrees by this MOU to allow Cable and Wireless to reduce the staff within one year which means that pressure will be put on staff to quit within 12 months.

3. Cable and Wireless came to the table when the MOU was signed in November without a business plan for BTC and they were to produce one by 7th January. Have they now done so and will the Government immediately make available the business plan?

7.4.4. The FNM Government agrees to allow Cable and Wireless to control the company BTC from Jamaica and to allow Cable and Wireless to charge fees to the Bahamian entity for services provided by its parent or affiliated companies.  This means that internal charges and expenses will be generated from outside the country and Bahamian consumers will have to pay the costs. (7.8.4)

7.9.1 The FNM government agrees to shut down the pension scheme now used by BTC and create a new one.  The government agrees to pay 39 million dollars to protect the pension fund and to pick up the costs of any future liabilities of that fund except for ten per cent which Cable and Wireless will pay.  But Cable and Wireless will be allowed by the FNM government to seek to persuade the employees who are in the pension scheme to transfer into the new contributory scheme. We believe that the employees will be pressured to join the new scheme which they will have to pay for, We are seriously concerned about this issue and it shows how much of a fire sale the $210,000,000 price is because the Bahamian people in reality will not be getting $210,000,000 but it will be minus 39 million (the minimum pension payment to be given by the government) and 15 million dollars less (the amount for exigencies to be left in the company by the government).

7.10.4 What is most egregious is the FNM government has apparently designed an agreement which will effectively prevent any Bahamian from seeking to buy the company.  There are provisions in the MOU which preclude Cable and Wireless from selling to any company or group that does not have market capitalization of at least $750,000,000.  This puts it out of the reach of any Bahamian company.

We attach here to the Memorandum of Understanding. 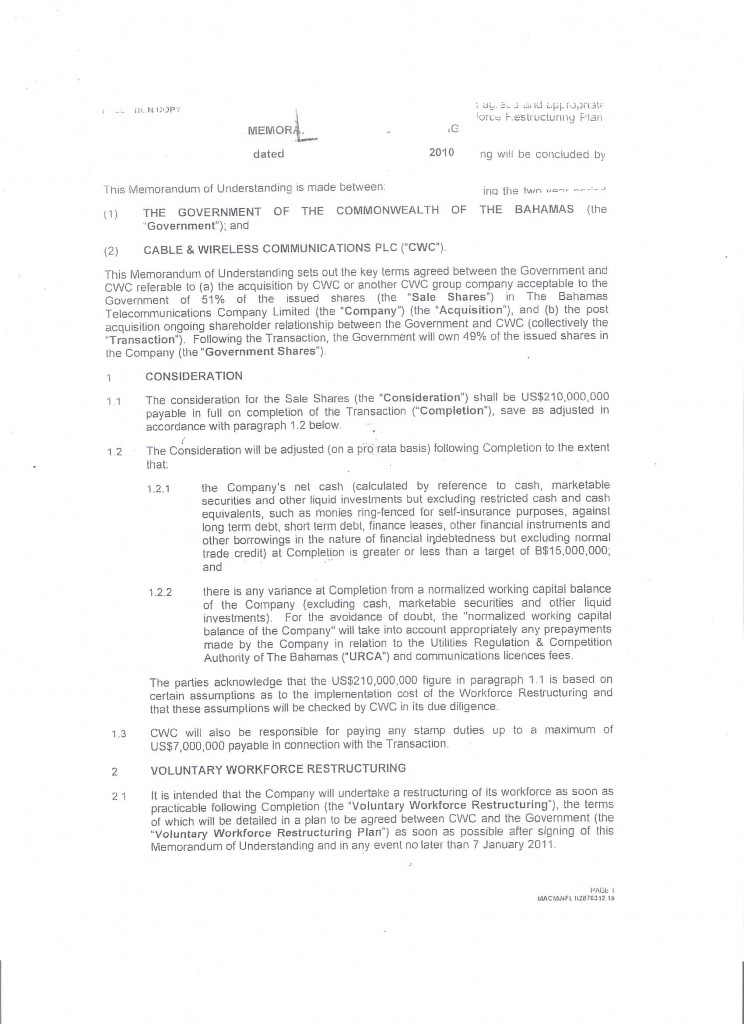 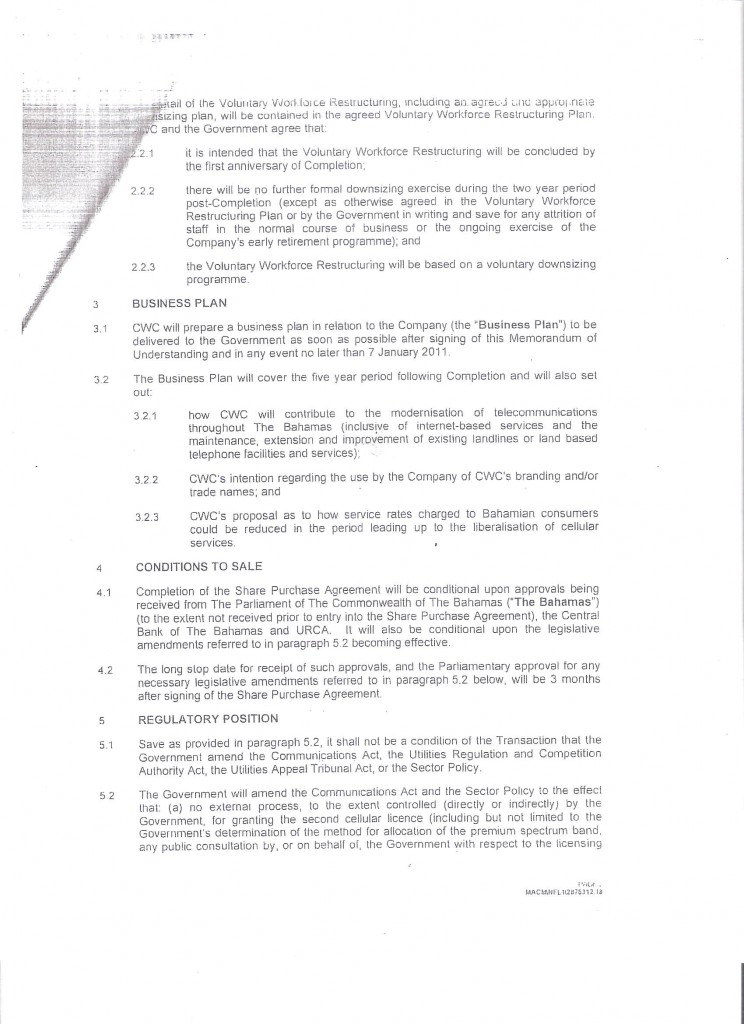 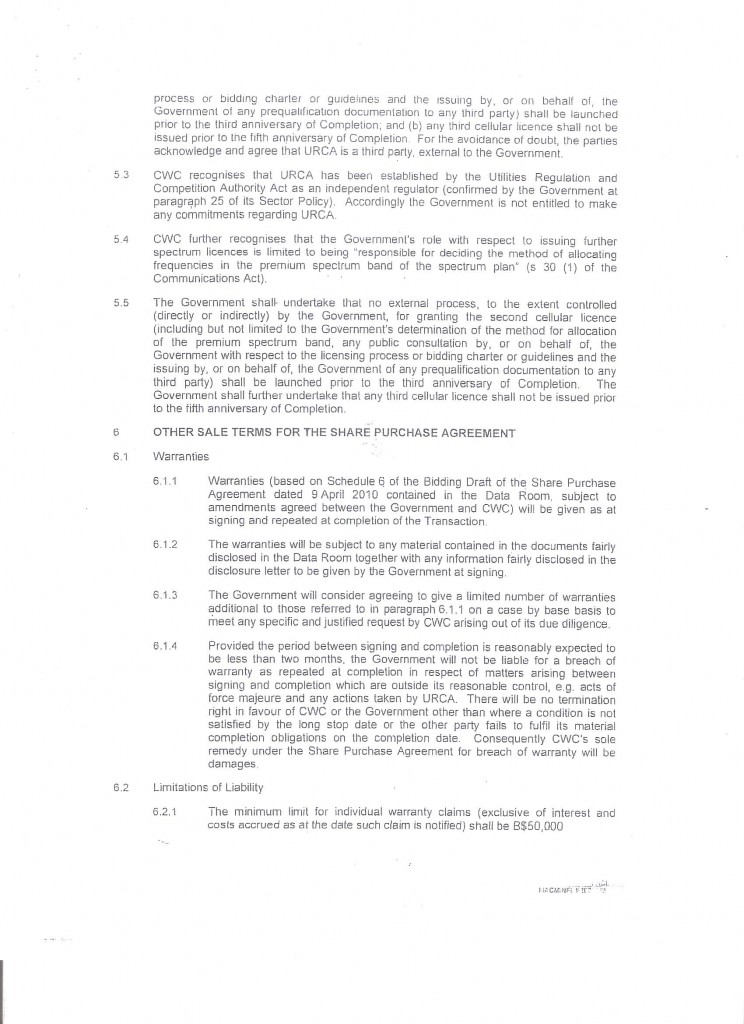 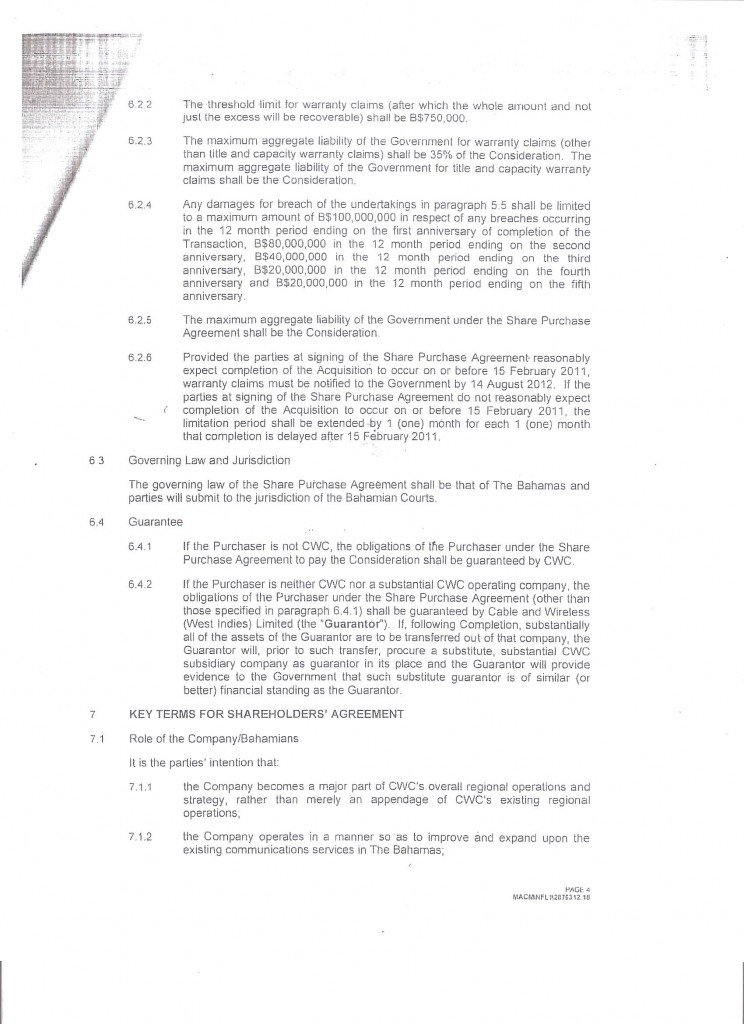 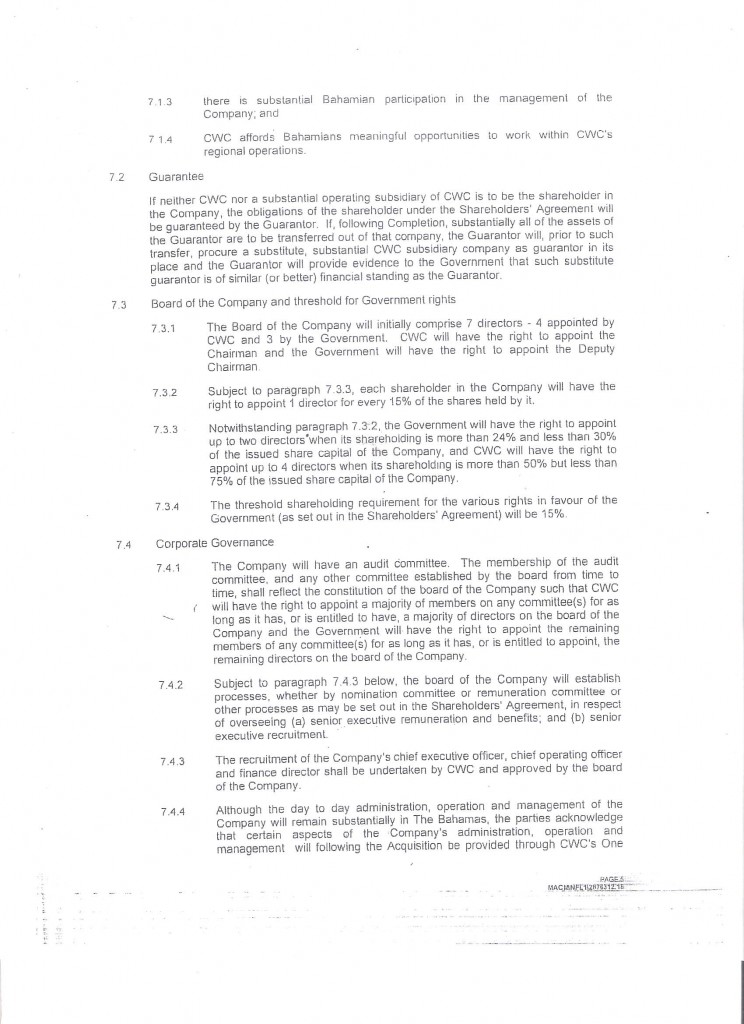 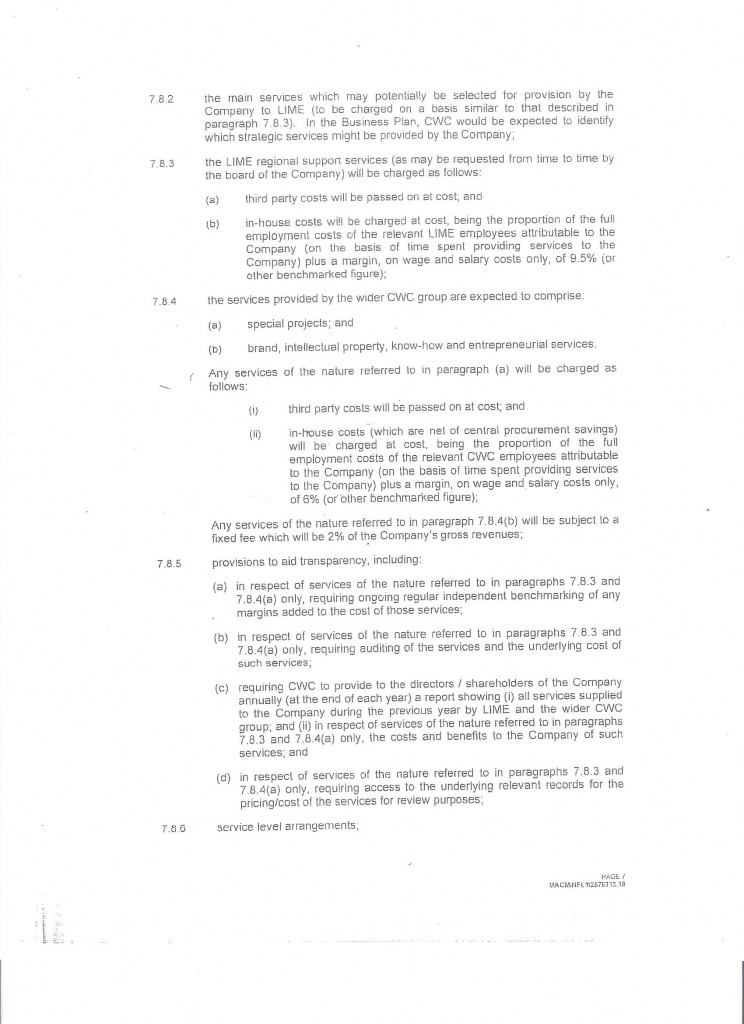 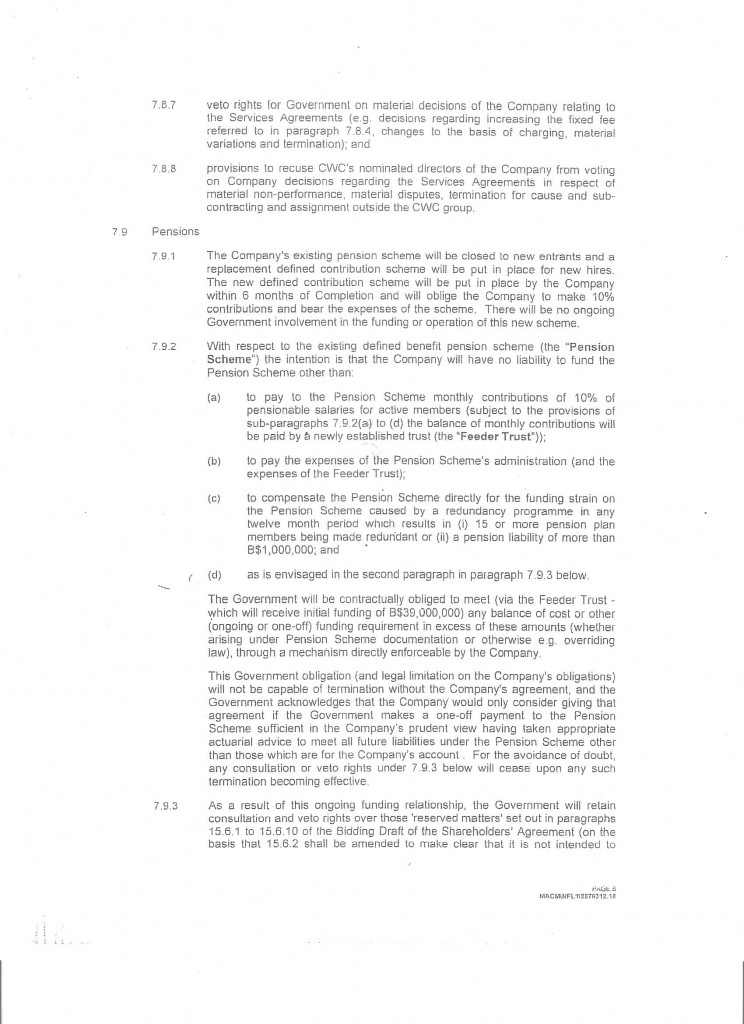 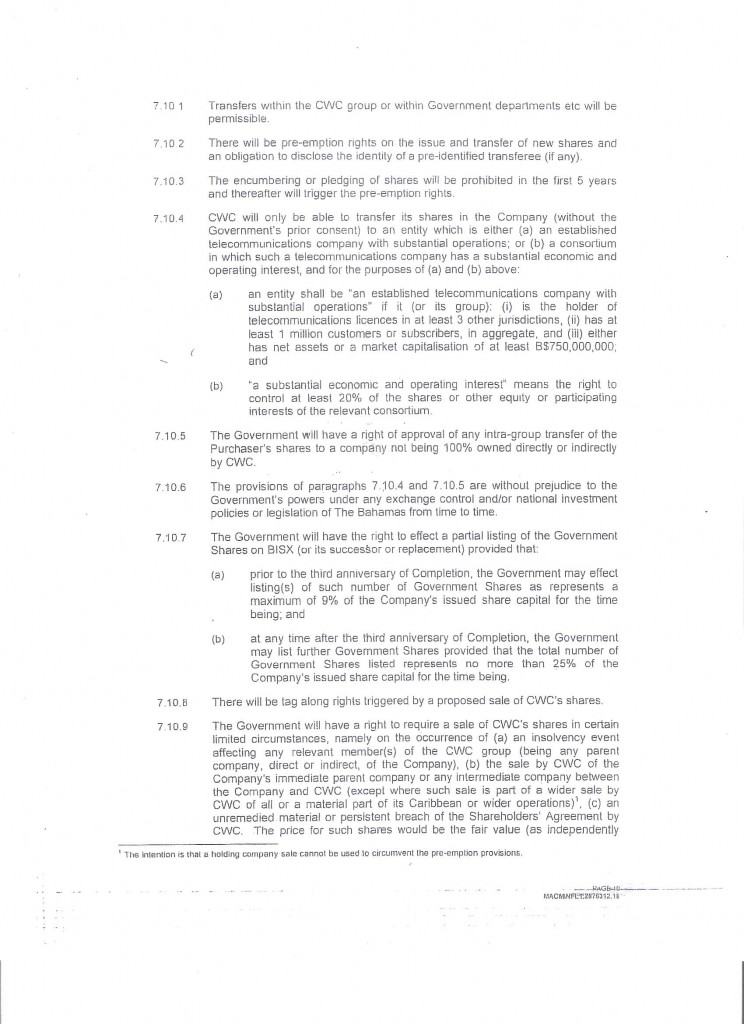 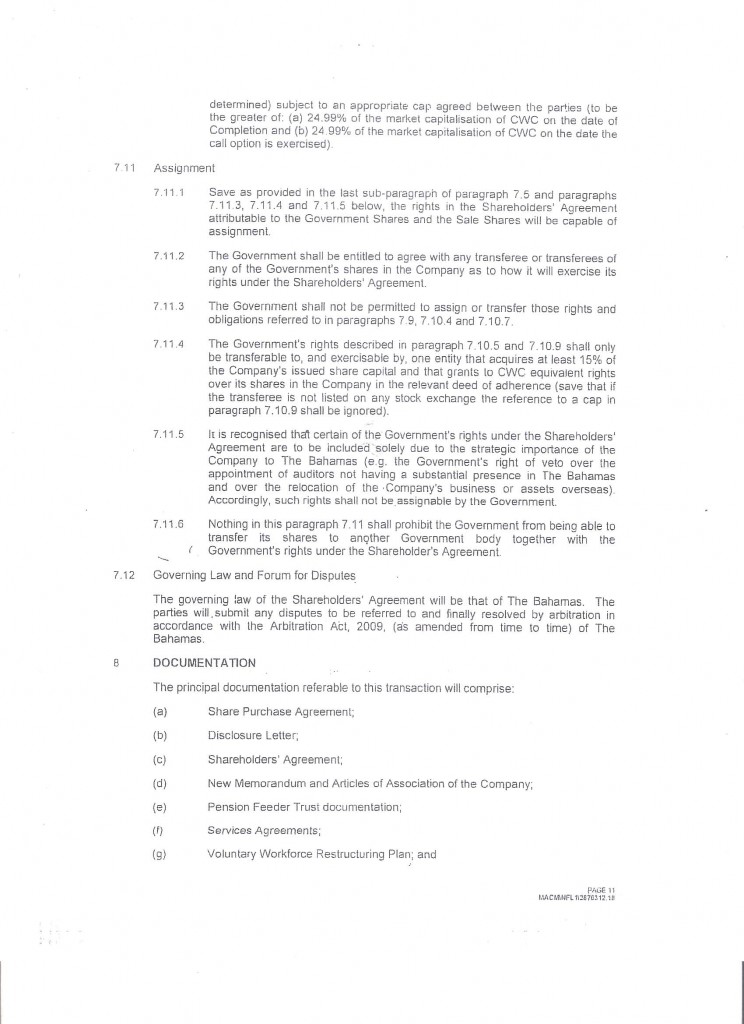 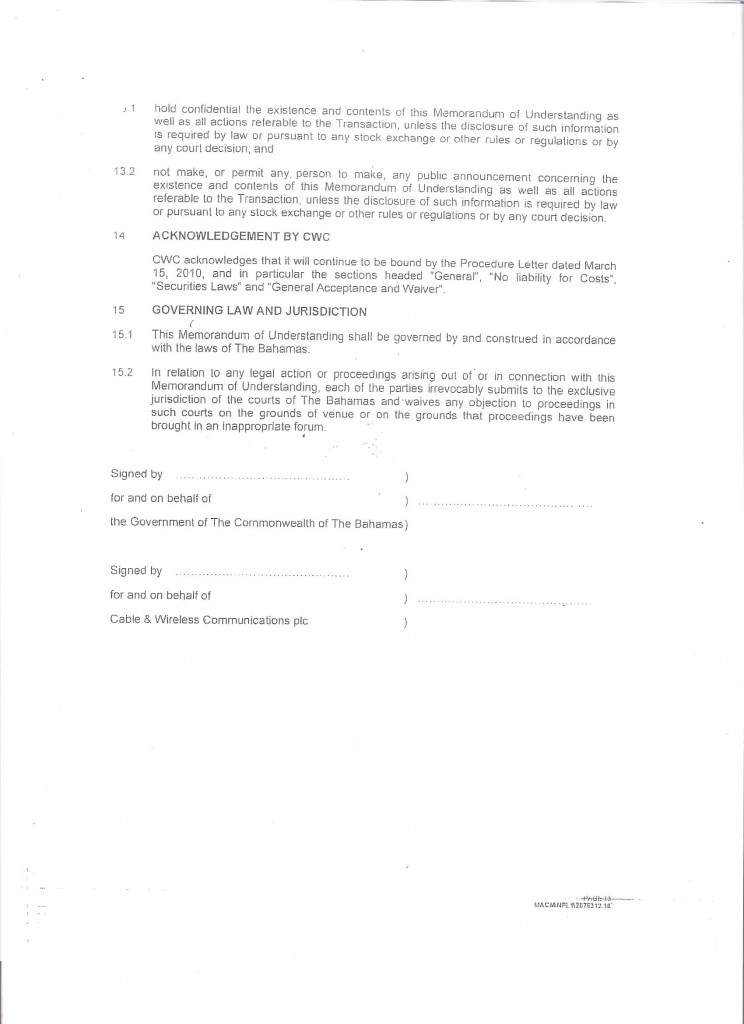 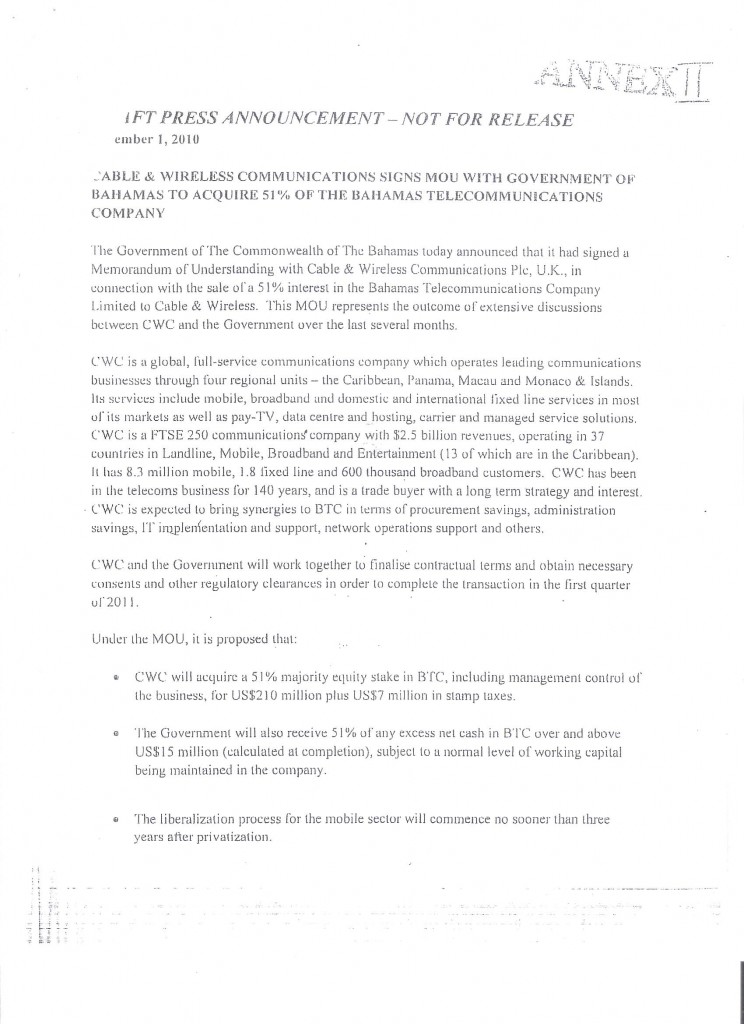 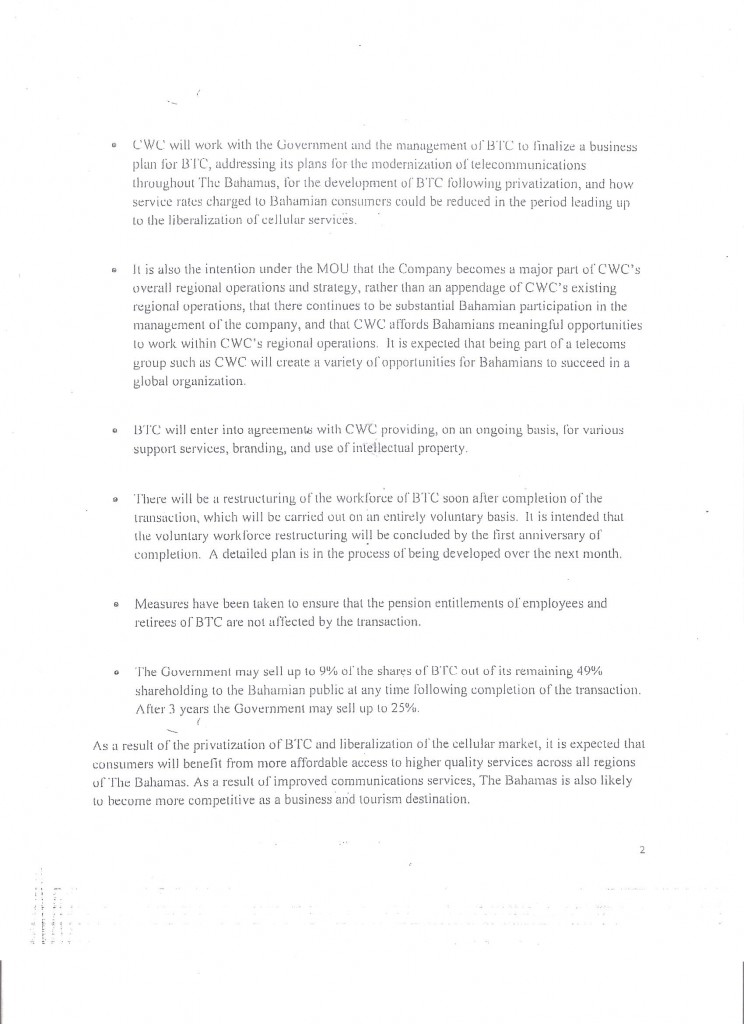 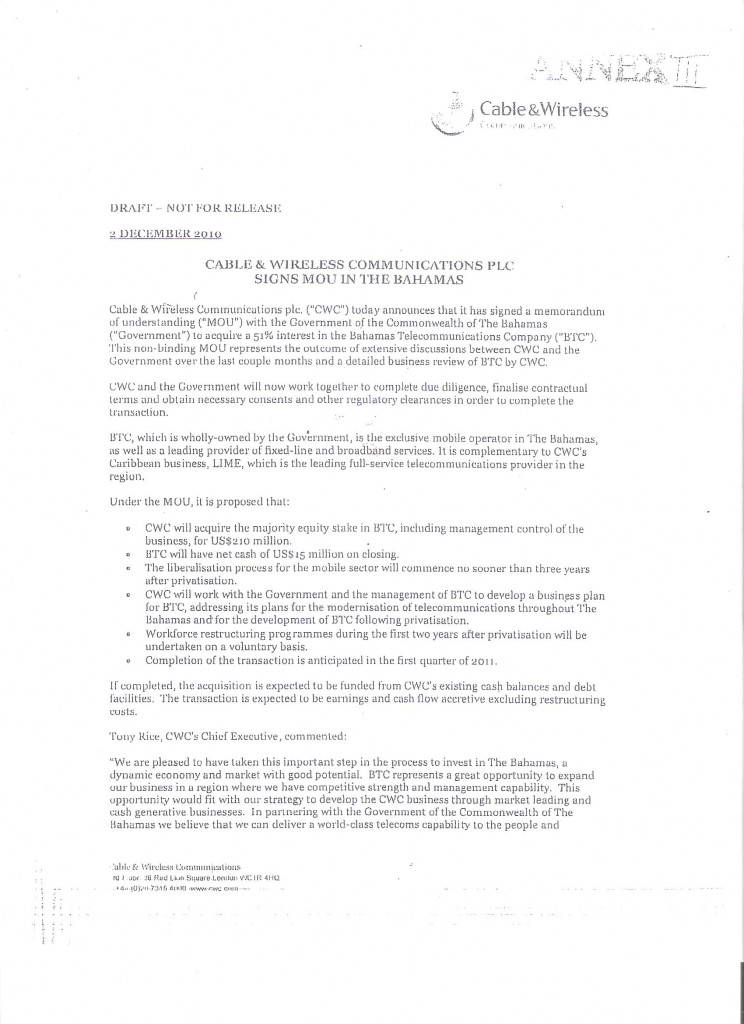 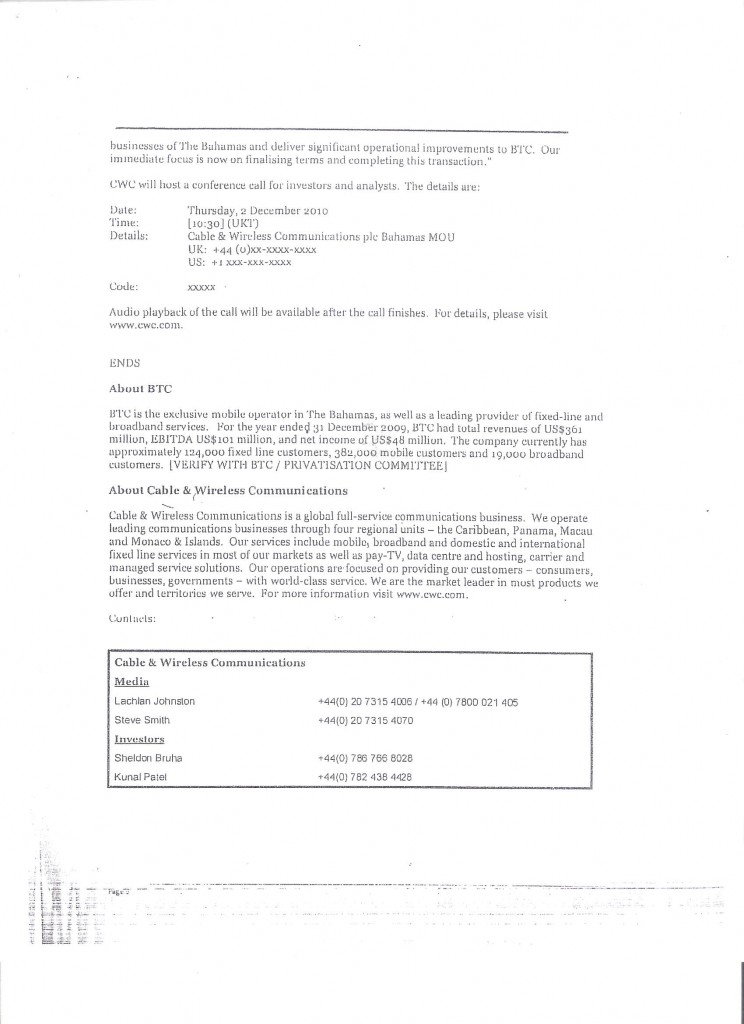