As a guest on Steve McKinney’s “Hard Copy” radio talk show on LOVE-97 last week, Progressive Liberal Party National Chairman Bradley Roberts made a startling claim that must have angered all residents of New Providence who have had to endure immeasurable inconvenience and hardship as a result of the Free National Movement (FNM) government’s disastrous road improvement project.

Quoting extensively from a document prepared by consultants hired by the FNM to advise it on a Traffic Management Plan to be implemented during the road works, Mr. Roberts presented unequivocal evidence that the FNM failed to adhere to the suggestions offered by the consultants that would have made the National Road Improvement Project (NRIP) more manageable and less disruptive in the every-day lives of residents of New Providence.

Here’s an excerpt from the document Mr. Roberts quoted from that makes it absolutely clear that the FNM government, for whatever reason, placed the concerns of the motoring public at bottom of its list of priorities when it started the road improvement project:

Obviously, had these suggestions been followed, the nightmare that exists today for many residents of New Providence could have been avoided.

In listening to Mr. Roberts, however, what amazed me more than anything else was his claim that he submitted a copy of the document he was reading from to the two major daily newspapers, The Nassau Guardian and The Tribune, and neither one thought it was newsworthy enough to do a follow-up story.

I’ve been in the newspaper business for more than 50 years, having started as a cub reporter with The Tribune in May of 1960. During my long career as a journalist, which included serving for several years at different times as editor of both The Guardian and The Freeport News as well as 12 years as news editor of The Washington Informer in Washington, D.C., I think I developed a fairly good sense of what has potential to be a great news story. The information revealed by Mr. Roberts unquestionably fits into this category.

Here we have a government that refuses to accept the guidelines recommended by its own consultants to minimize disruption in the flow of traffic during its overly ambitious road improvement project, and a switch did not turn on in the minds of the decision-makers in the newsrooms of The Guardian and Tribune to ask this simple question: “What motivated the government to make such an extraordinary decision?”

At the very least, one of the cadre of excellent young journalists working at both newspapers should have been given an assignment to make some enquiries into this hot-button issue. Without even giving it much thought, one of the first questions that should have come to mind was this: Who in the government is benefiting from this major project being carried out without implementing the recommendations of the consultants?

Neither The Guardian nor The Tribune, however, thought that the information provided by Mr. Roberts, which the PLP subsequently summarized in a press release, was newsworthy. Their reason for ignoring this potentially explosive story, of course, is that both publications have now become propaganda vehicles of the Hubert Ingraham administration, and both appear to be jostling to see which one could be the most biased.

The Tribune seems to be winning that race. Its publisher Eileen Carron, who writes most of The Tribune’s editorials, is a fanatic “Ingraham groupie,” and she generally does not publish letters that are critical of Ingraham and his government.

And it seems as if The Tribune’s news staff is instructed to monitor the radio talk shows to come up with story ideas that are favourable to the FNM. We saw a good example of this in The Tribune’s story on remarks made by Steve McKinney during the show on which Mr. Roberts was the guest.

Mr. McKinney mentioned that someone in the FNM must be making millions of dollars from the road works, noting that one company in particular receives contract after contract from the government for the repaving of roads. He did not call any names, but he obviously was referring to Bahamas Hot Mix, in which Deputy Prime Minister Brent Symonette reportedly is a major shareholder.

Although The Tribune did not think the information provided by Mr. Roberts on the government ignoring the advice of its consultants was news, a Tribune reporter called Mr. Symonette for a response to what was said on Mr. McKinney’s show. The subsequent story that resulted from that interview with Mr. Symonette revealed not only a disturbing degree of arrogance that suggested he doesn’t give a hoot what the Bahamian people think about how he chooses to add to the hundreds of millions of dollars he already has, but also that he does not fear any form of retribution from Prime Minister Ingraham as a result of his greedy behavior.

The latter could very well be because of reports that Mr. Ingraham had to apologize to him profusely after unflattering remarks he made about Mr. Symonette were published by The Guardian during its series of stories on those Wiki Leaks diplomatic cables; indeed, there were reports that Mr. Symonette had threatened to resign from his cabinet. If this is indeed true, then it is quite clear that Mr. Symonette can continue to do as he pleases within the FNM, knowing that Mr. Ingraham can’t dictate what he can or can’t do.

In that Tribune article, Mr. Symonette had the gall to admit that his interest in Bahamas Hot Mix has been public knowledge for years, but added that his shares in the company “are owned my children’s trust…” If this explanation was intended to mislead the Bahamian people into thinking that he does not benefit from the millions being made by Bahamas Hot Mix from the current road works contract, then Mr. Symonette clearly has no respect at all for the intelligence of the Bahamian people.

If the money being generated by his interest in Bahamas Hot Mix is indeed “owned by his children’s trust,” then he obviously has abandoned his own ambition to be Prime Minister of The Bahamas, and is paving the way for the next generation of Symonettes to make their mark in Bahamian politics, in the same manner that his late father, Sir Roland Symonette, the first premier of The Bahamas, did for him by parlaying money made from his rum-running days during his youthful years into being one of the country’s most successful businessmen.

Be that as it may, Prime Minister Hubert Ingraham seems very much at ease in compromising his integrity in this manner, as is quite clear from his decision to use the Aga Khan’s private helicopter for what has now been an extended tour of the various islands affected by Hurricane Irene.

This is surely something that the Opposition PLP should officially question. How much does it cost to operate this helicopter and who is paying for it? Is it a gift from the Aga Khan and if it is, what is he expecting in return?

What’s more, could it be that Mr. Ingraham is testing the waters to see just how much opposition he gets before requesting that the Aga Khan allows him to use his helicopter during the general election campaign? It may be okay, and I still don’t think that it is, for Mr. Ingraham to be using the Aga Khan’s helicopter to assess damages caused by Hurricane Irene, but it is definitely not appropriate for him to use it during the election campaign.

This country is not for sale, but it could very well be that the Aga Kan is positioning himself to do the next best thing; that is, buy the loyalty of the politicians he thinks will still be the government of The Bahamas after the next general election. 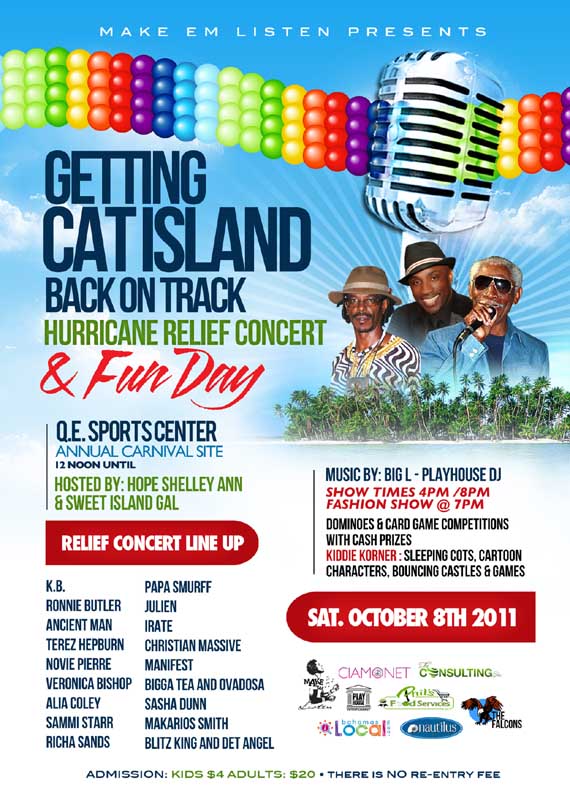