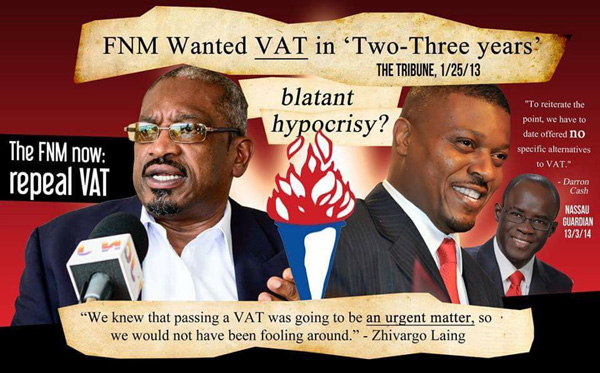 The Free National Movement (FNM) had planned to implement a Value Added Tax (VAT) within “two to three years” if it had been re-elected in May 2012, a former Cabinet Minister yesterday saying it would “not have been fooling around with a gaming referendum”.

Acknowledging that the Government’s finances were- and continue to be – on an unsustainable path due to heavy deficit spending during the recession, Zhivargo Laing, former minister of state for finance, told Tribune Business that an Ingraham administration would have targeted VAT implementation as “an urgent priority”.

He disclosed that another part of the FNM’s ‘fiscal rebalancing’ strategy would have been to “wean” the likes of Bahamasair and the Water & Sewerage Corporation off taxpayer subsidies, potentially through full or partial privatisation.

While former prime minister, Hubert Ingraham, ruled out any attempt at tax reform during his 2007-2012 administration, Mr Laing said its focus would have turned to this had it been re-elected to office.

And he also took a thinly-veiled swipe at the Christie administration’s seeming preoccupation with Monday’s gaming poll, suggesting the Government was being distracted from more worthy issues that merited its full attention.

“We knew that passing a VAT was going to be an urgent matter, so we would not have been fooling around with a gaming referendum,” Mr Laing told Tribune Business. “A VAT would have been an urgent priority by the Ingraham administration.”

He added that, if re-elected, an Ingraham administration would have moved speedily to release a ‘White Paper on Tax Reform’, seeking to “get that [VAT] done in two-three years”.

Reminded that the former FNM administration itself had examined the potential legalisation of web shop gaming, and what needed to be done to effect this, Mr Laing said that even if a referendum/poll was required, it would not have distracted any government he was part of.

“If there was [a referendum], it wouldn’t have taken precedence over that,” Mr Laing said in relation to VAT and tax reform.

He added that an Ingraham administration would have sought to continue what it started with the Bahamas Telecommunications Company (BTC), namely privatising state-owned entities – especially the loss-making ones – and getting them off the Government’s balance sheet.

“It’s a huge part of the drain on the Government’s finances.”

Indeed, the Christie administration, through Michael Halkitis, the successor to Mr Laing in the Ministry of Finance, has articulated similar ambitions when it comes to eliminating the multi-million dollar taxpayer subsidies – running at $50-$60 million annually – to loss-makers such as ZNS, Bahamasair, the Water & Sewerage Corporation and Hotel Corporation.

The Government has also picked up where its predecessor left off when it comes to tax reform and VAT, and two other areas of focus identified by Mr Laing – better collection and enforcement of real property taxes, and a Debt Committee that is examining what can be done to reduce current and future debt servicing (borrowing) costs.

The almost-identical strategies, apart from privatisation and the timelines involved, lend credence to those who suggest that, in many cases, there are few policy differences between the FNM and the PLP – the main distinction being implementation and execution.

Mr Laing, meanwhile, acknowledged that the former Ingraham administration knew the fiscal deficits it was running – and corresponding increases in the national debt – were “unsustainable”.

“We did the kind of spending we did at the height of the recession as counter-cyclical financing,” he said. “We demonstrated what we would have done; revenue measures, spending cuts. To clear the fiscal deficit we were looking at a number of things.

“It was unsustainable, the level of deficits we were sustaining during the recession. We knew we cannot stay on that same path.

“We knew it would have an impact on our fiscal circumstances, and once the recession passed we started to take revenue measures, increasing taxes in some areas, cutting expenditure in some, and happened to be criticised by those people who refuse to do the same thing.”

Mr Laing also hit at the Progressive Liberal Party’s (PLP) criticism of holding a Mid-Year Budget between 2007 and 2012, suggesting its recent emphasis on next month’s announcement showed it had performed a policy ‘u-turn’.

“But this same set of people, who criticised us for spending, followed it up with even more spending at a $550 million deficit.”