Super Value threatens job cuts and now holds a gun to its employees’ heads on VAT! 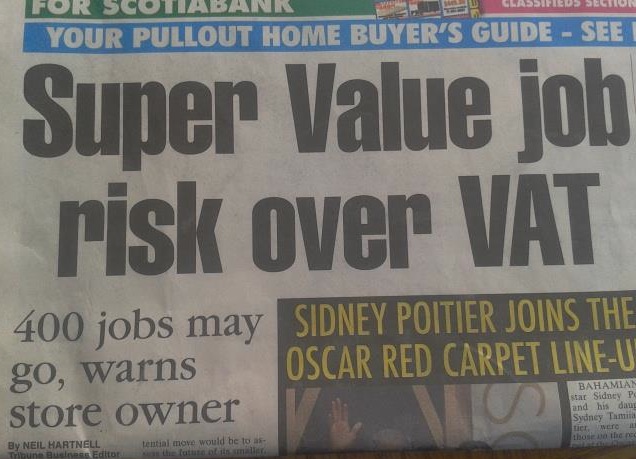 Nassau, Bahamas — Well, the opponents of Vat have a new strategy. This morning Super Value owner suggests in the Tribune that if VAT comes, workers will be fired.

Now that is the latest threat by merchants who refuse to pay taxes.

Some wealthy people in this town really believe only poor people are supposed to pay taxes. They believe people like Ishmael Lightbourn could work as a partner of a major firm and pay none. They believe politicians [THE KINGS OF THE EARTH] are exempted from paying taxes; and when it comes down to it, only the poor peasants must find the money to carry the kingdom.

This is an old system that has been carried on for far too long.

Everyone must pay. The rich and poor. The politician, the number man, the insurance company, the church and the gambler if we are to create a real; fair, honest, equality driven and just society.

And so this morning the Super Value owner says jobs will go if Vat is implemented. But, oh, how we forget.

This is the same argument raised by the number boys when the “YES” Vote campaign lost on January 28th, 2013.

Here was the rhetoric just days before the Gaming VOTE by the WUTLESS MEDIA:

“Web shop chiefs are secretly planning to cut expenses by laying off hundreds of web shop workers and replacing them with automatic lottery machines, according to industry insiders.

“With 144 web shops operating in The Bahamas, bosses are concerend with the rise in taxes that might occur if playing numbers is made legal.

“The secret layoff plan was discovered only days before the gambling poll (mistakenly called a referendum) when Bahamians will be asked to vote on whether to regulate and tax web shop gaming, and to establish a national lottery.

We heard this song before, and guess what? After the “NO VOTE” came down, more licenses were issued and more people employed in the illegal numbers racket.

The merchants should come with a better story, like: “Super Value with they damn high prices will close its doors so the Bahamian people can enjoy the low discount prices at Phils!”

This is what we want to hear, cause, some people refuse to pay their taxes now and they expect us “the poor” to keep carrying the country!