San Salvador, Bahamas — Mr Laing had indicated that there would be no activity taking place on the property to the extent that the Government could stop it, until the Ministry of Finance had come to some determination about who held the Title to the property.

He had promised to return and inform all interested persons on the findings of the Ministry in relation to any Title to properties.

“Clearly,” Mr Laing said, “we have taken a lot of time to gather as much information as we could to make some determinations about the property, all of the claims and speculations about this property on Fortune Hill.”

He also explained that the only reason why he is still involved as Minister of State in the Ministry of Finance is that Treasure Trove under the laws of The Bahamas falls under the responsibility of the Minister of Finance.

Mrs Beal and her agents have asked for permission to go ahead and begin researching the area to determine any findings in relation to what they believe may be there, Mr Laing said.

She is going to have to apply to the Antiquities, Monuments and Museums Corporation for permission to do her initial speculating, he explained.

“When people have Title to their property, the State has no duty outside of the public’s interest from preventing them from doing what they want on their property. 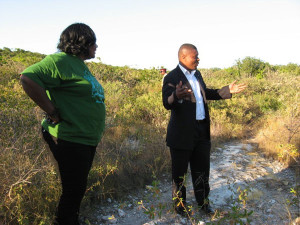 “You can dispute ownership all you want; that is your business. If you want to dispute it, go to court,” he said.