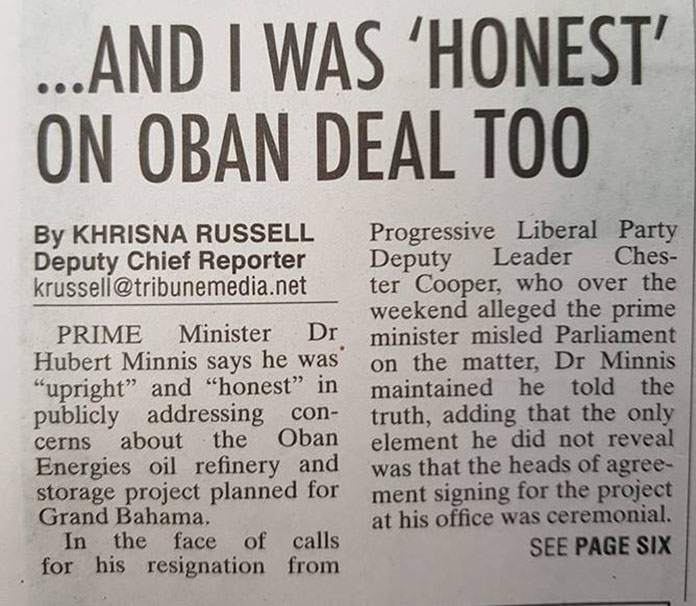 Nassau – The holder of the Office of Prime Minister is today in the papers, attempting to convince the public that he was honest with the OBAN Fiasco.

Even the suggestion by the PM appears to be dishonest.

Let’s be real now. Does anyone really think the PM knew Peter Kreiger was a FRAUD/TaxCheat/Embezzler and confessed to crimes before the PRESS discovered the same?

And if the PM was honest on OBAN, why you think he opted to not tell us these things [that he committed FRAUD/TaxCheat/Embezzler and confessed to crimes] about Peter Kreiger?

– Why you think the People of the Bahamas had to find out from the Nassau Guardian that Peter Krieger signed on the Heads of Agreement using the name Satpal Dhunna?

– Why you think we had to learn of the 690 acres of Crown Land granted to Oban Energies from Mr. Dhunna at the Town Meeting?

– And why was the HOA tabled in Parliament dated February 19th – when Mr. Dhunna was not even in the country?

But yet the PM comes to shop the thought that he was honest? PLEASE!

PM Minnis is beginning to sound worse than President Trump.