BP is questioning how this case ended up in New Providence when the alleged crimes occurred in the Grand Bahama airport!I BET THE MAGISTRATE WILL NOT APPEAR ON MONDAY MORNING!!!

Mother lost her freedom as gun was found in the home and husband says it is not his! 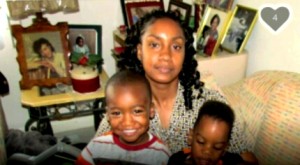 Grand Bahama – A story out of Grand Bahama some five years ago has come to head after a judge last week sentenced this mother, 34-year-old, Tivona “April” Martin, and her husband to prison for four solid years.

The story all unfolded when police entered the couple’s home five years ago and made the discovery of an unlicensed firearm inside. No one took responsibility up to having owned or purchased the weapon and thus both Martin and her husband were detained.

A lengthy trial last week resulted in a conviction and, as they say, the rest is history.

We at Bahamas Press decided to present this report because sometimes we wonder why is it JUSTICE IN THE BAHAMAS appears to be cockeyed!

This example here has left us puzzled. “April” was a mother of two. One of her two sons is hearing impaired. She denies having ownership to the weapon; yet she is thrown in jail with the husband [the one who many suspect is indeed the owner of the firearm].

But then let’s go to this similar incident involving former FNM Senator John Bostwick. Investigation confirms the politician passed through the X-ray machine at the Grand Bahama airport around 7:20 pm on a Saturday in May 2014 and was asked to step aside by a security officer. Initially he had placed his bag carrying the ammunition on the belt, then attempted to remove it, according to sources. By that time a security person advised that the bag remain as it was placed for scanning.

With all cameras on at the airport, the Senator was then asked if the carry-on was his. He responded in the affirmative. He was then asked to remove the contents of his pack and there, lo and behold, the contents – including ten live rounds of .22 ammunition that were found on May 17, 2014 – were removed.

By some great mystery, however, unlike “April”, who had to have her case heard in Grand Bahama, someone in the Bostwick camp we believe began shopping for a judge, and, before you know it, the case opened in Nassau.

Bahamas Press wonders why, though, a crime, which may have been committed on Grand Bahama, allows the suspect to be brought before the courts in Nassau? How did that happened?

We wonder why taxpayers must now transport some 10 witnesses for the crown into the Capital for the case?

We wonder if, like everyone else having been released on bail for similar offenses, he also is now fitted with an electronic bracelet?

“I’m proposing a FINAL adjournment to June 8, [2015]. The prosecution needs to have themselves ready to go,” Magistrate Andrew Forbes said in April, adding that if they did not do so, he would have proceeded with a discharge.

And so it looks as if the case has been completed before it can even start!

All the police and witnesses had failed to appear so that the matter can proceed! WHAT IS THIS?! HOW DID THIS CASE GET IN NASSAU?!

You see, when Dr. Curtis McMillan, the former PLP Minister of Health, was traveling from South America in late 1979 – 1980 to a Grand Bahama airport, he too was stopped and searched. It was discovered that Dr. McMillan has drugs strapped in a pouch around his belt. He went to jail for the crime! McMillan had Sir Cecil fighting with all his power to move the case to Nassau. He was unsuccessful! And the sentence was handed down and the rest is history!

How is it McMillan and “April” get trapped while others walk free?!

Bostwick, meanwhile, remains on a $9,000 bail and returns to court this coming Monday morning! We ga see what happens with this!