House Speaker Must be STOPPED BY ALL MEANS NECESSARY as he fails to UPHOLD THE CONSTITUTION AND DEFEND THE COURSE OF FAIRNESS OR NATURAL JUSTICE!!!! 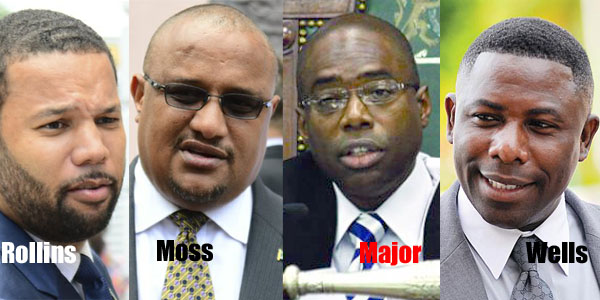 By Jerry Roker for Bahamas Press

Nassau, Bahamas — When I was a young lad growing up, we were not allowed to play with cards. It wasn’t until I was a teenager that I risked the wrath of my family members by indulging in friendly games of “nucks.” While doing so, I was always fascinated by the fact that there were only four jokers in the deck and instead of playing with them, we always took them out. The reason why they were not used as part of our games still escapes me.

Fast forward to the present, and on the government side of the political divide there are now four operatives whose behavior smacks of political cannibalism. I call them jokers.

Since he was fired as Chairman of NIB, he has been pretty much on a tear, criticizing virtually every major policy initiative of his government. Let me hasten to say that as far as i am concerned, for the most part, his positions are well-reasoned and thoughtful.

It is my understanding of our system of party politics, that one has the opportunity to state ones views on all matters proposed by the party, or your own proposals, at regularly scheduled parliamentary meetings. Certainly, if I am a team player, I would want my colleagues to see or hear my views before I vent them publicly. It’s just basic decency, unless it is your intent to embarrass your government. It is not what you do, but rather how it is done.

Marco City is on record as opposing at least one of the four amendments proposed by the Constitutional Reform Commission, ostensibly because, as he puts it, it might open the door for same sex marriage. Utter rubbish! These amendments have as their core purpose equality. Why muddy the water, Marco City? And you know what? He has been given a free ride by those who seek to politicize these matters. In spite of all of this, I give him my J of hearts.

Letter of intent will forever be etched in the minds of Bahamians who heretofore never heard of it. A rather simple matter, Bamboo Town, by his obstinance, arrogance and disobedience, turned it into a spectacle. Mr. Christie spent quite a bit of political capital on Bamboo Town, and I am not sure it was money well spent, because soon after Bamboo Town was fired from his position as Parliamentary Secretary in the Ministry of Works he threw his unequivical support for and approval of the behavior of Fort Charlotte, who himself had been fired for misbehavior. Literally everyone who I have spoken to spoke glowingly about Bamboo Town’s intellect and intelligence. My grammy use to say: son, education ain’t sense. Bamboo Town gets my J of diamonds.

From way back yonder, I can recall reading media reports of Autitor General’s reports being presented to Parliament. These reports were eventually debated and often provided information that those in power during the period of the audit were roundly criticized about. It always seemed that these reports had exceeded their shelf lives as they covered periods long past. There was a reasonable conclusion that, where weaknessess were brought to the fore, the Ministry of Finance would ensure that they were fixed.

Well, a recent Auditor General’s report on the Small Homes Repairs Project of The Urban Renewal Commission, made its way into the hands of the media. To the best of my knowledge and belief, it was never brought to our Parliament as required by our Constitution. But the Public Accounts Committee apparently summoned the Co-chairs of the Commission to a meeting, to discuss the Auditor General’s report. They refused to appear for no other reason that, under the circumstances, it would have been improper for them to do so. Enter Garden Hills to the rescue. On a matter not before the Parliament, he is seeking to coerce the Co-chairs into appearing before the PAC. Well, blow me down! I wonder if Garden Hills is seeking to bring to fruition, the views espoused by his former spiritual leader on the question of leadersip in the country. Mr. Christie, you’d better watch your back sir. Garden Hills gets my J of spades.

More so than all the others, Mr. Christie placed his personal and political credibility on the line to ensure Ft. Charlotte had a place in Parliament. But what thanks did he get? Ft. Charlotte ‘bit the hand that fed him.’, even when Mr. Christie gave him an opportunity to atone for his belligerence, disrespectfulness and bad manners. He continues on his path like a raging bull. It is quite understandable why Mr. Christie wiil be disappointed with the performances and behavior of quite a number of his ‘new generation leaders.’

What was very instructive for me recently was Ft. Charlotte urged the government to settle with the policyholders of the private company CLICO that went belly up, but said no to National Health Insurance. At least we know where his head is. Ft. Charlotte gets my J of clubs.

Teams need people who speak up and express their thoughts and ideas clearly, directly, honestly, and with respect for others and for the work of the team. That’s what it means to communicate constructively. Such a team member does not shy away from making a point but makes it in the best way possible — in a positive, confident, and respectful manner.

Team members who function as active participants take the initiative to help make things happen, and they volunteer for assignments. Their whole approach is can-do: “What contribution can I make to help the team achieve success?”

Cooperation is the act of working with others and acting together to accomplish a job. Effective team players work this way by second nature. Good team players, despite differences they may have with other team members concerning style and perspective, figure out ways to work together to solve problems and get work done.

Team players treat fellow team members with courtesy and consideration — not just some of the time but consistently. In addition, they show understanding and the appropriate support of other team members to help get the job done. They don’t place conditions on when they’ll provide assistance, when they’ll choose to listen, and when they’ll share information. Good team players also have a sense of humor and know how to have fun (and all teams can use a bit of both), but they don’t have fun at someone else’s expense. Quite simply, effective team players deal with other people in a professional manner.

Which team are these guys on?

Stay tuned this Sunday as BP will present a special report on the Rubis Matter….