London – Boris Johnson has quit as foreign secretary, claiming in his resignation letter that the UK was headed “for the status of a colony” if Theresa May’s soft Brexit plans were adopted.

The leading Brexiter said that he tried to support the line agreed at Chequers on Friday but while the “government now has a song to sing” he could not manage to support the plan agreed.

“The trouble is that I have practised the words over the weekend and find that they stick in the throat,” Johnson wrote. “Since I cannot in all conscience champion these proposals, I have sadly concluded that I must go.”

May’s negotiating pitch to the European Union would see the UK agree to adopt a “common rule book” on standards for food and goods in return for achieving greater divergence on services and digital regulation, a proposal that has worried hardline Brexiters since it was leaked last week.

Pressure on the foreign secretary had been mounting since fellow pro-Brexiter as Brexit secretary on Sunday night, swiftly followed by his No 2 at the Department for Exiting the EU, Steve Baker.

A Downing Street spokesman said: “This afternoon, the prime minister accepted the resignation of Boris Johnson as foreign secretary. His replacement will be announced shortly. The prime minister thanks Boris for his work.”

After the Chequers summit, it emerged that Johnson had referred to attempts to sell May’s Brexit plan as being akin to “polishing a turd”.

As the flamboyant public face of the Vote Leave campaign, his departure will deepen the sense of crisis around May and increase the chances that she could face a vote of no confidence.

One senior Brexiter suggested more resignations could follow if May sticks to her plan: “They’ll keep going, one by one, until she either junks Chequers or goes.”

Johnson’s resignation was announced on Monday afternoon as Labour MPs were being briefed about the government’s soft Brexit plan by May’s de facto deputy, David Lidington.

May appeared before a packed House of Commons minutes after news emerged of Johnson’s resignation, cheered loudly by Tory MPs as she arrived. She acknowledged the resignations of Davis and Johnson at the beginning of her statement on Friday’s Chequers agreement, briefly thanking Davis for steering through the “most important legislation for generations” and Johnson for showing passion in promoting “global Britain to the world”.

She did not elaborate on the turmoil engulfing her government, saying only that “robust views had been exchanged around the cabinet table, as they have been around the breakfast table”. She said she expected cabinet members to conform to collective responsibility now that a soft Brexit policy had been agreed.

Few at Foreign Office will mourn Boris Johnson’s departure
Read more
Other ministers supporting hard Brexit took up their places on the frontbench, including Andrea Leadsom, Liam Fox and Penny Mordaunt. Michael Gove arrived late, unable to get a seat on the frontbench initially, before sitting on the benches reserved for cabinet members after Jeremy Corbyn had spoken. But there was no sign of either Johnson or Davis in the chamber.

Speaking after May, the Labour leader said there was a crisis in the government, accusing her of presiding over “two years of soundbites, indecision and cabinet infighting”, adding that “more and more people [are] losing faith that this government is capable of delivering a good Brexit deal and that is just within her own cabinet”.

Brussels reacted coolly to news of the cabinet departures. Donald Tusk, the president of the European council, said the departure of Johnson and Davis did nothing to “solve the mess caused by Brexit”. 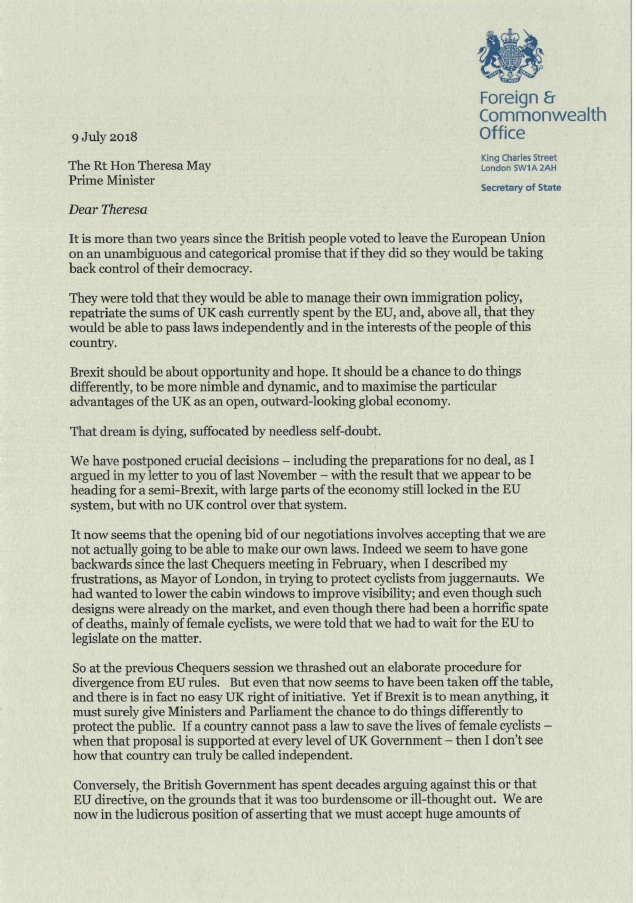