FNM Leader thrown out of the Parliament once again for behaving badly! 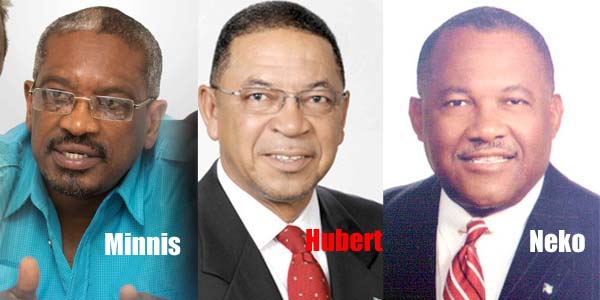 Nassau, Bahamas — Hubert Minnis, Neko Grant and Hubert Chipman have all been suspended and thrown out of the Parliament today after the trio began to disrupt the MP for MICAL, V. Alfred Gray, as he began to make his contribution in the House on the 2015/16 Budget Debate.

Minister Gray has been constantly heckled by the opposition following the incident in MICAL involving the arrest of a 19-year-old, where it was alleged that he interfered in a ruling by Administrator Zephaniah Newbold. Minister Gray was cleared of the allegations after Newbold told police he did not know what Minister Gray had told him.

Despite Gray being vindicated following an investigation Opposition MPs have attempted to silence Gray over the matter.

The Speak of the House Dr. Kendal Major ruled the suspension of the MPs today as he took charge of the proceedings. Government Leader in the Parliament, Dr. B. J. Nottage, advised the Speaker that, because the matter [involving Gray] had been ruled on by the Speaker himself and still the Opposition continued to behave in an undemocratic fashion, they all should be suspended for the entire budget debate. The Speaker has taken that advice under advisement.