‘Playing’ with a pierced tongue stud could lead to a gap between the front teeth – according to a new study.

The Research, which was carried out at the University at Buffalo in New York, suggested that tongue piercings could be a major cause of unnecessary orthodontic issues.

The report claimed that those with tongue piercings were likely to push the metal stud up against their teeth and consequently cause gaps and other problems to arise.

Dr Carter said: “It’s certainly something to think about before going out to get a tongue piercing. The temptation of playing with the stud in the mouth would be very high and in time this could lead to hundreds of pounds worth of corrective treatment.

“The results of this study stress the risks that are associated with tongue piercings. As well as causing an apparent gap, oral piercings can also lead to chipped teeth and infection.

“In order to avoid such health problems in the future, along with the spiralling costs of any related treatment, I would advise people to stay clear of tongue piercings.”

Lead author of the study, Sawsan Tabbaa, said that ‘force, over time, moves teeth’ and that the results are caused by people playing with their studs crop up in a ‘very high percent of the cases’.

A professor of orthodontics at the University at Buffalo School Of Dental Medicine, Tabbaa, explained that tooth damage was common in both past and current case studies.

The current study featured a 26 year-old female patient and showed that a space between the upper front teeth had appeared during a period of seven years, as the metal bar was pushed against and between the teeth.

The patient provided researchers with photographs to show that she had no diastema before having her tongue pierced.  It was strongly thought that positioning of the tongue stud between the maxillary central incisors caused the midline space between the front teeth.
The only solution was for the patient to wear a fixed brace for an extensive period of time.

The author concluded that tongue piercings could result in serious injuries, not just to teeth but said they have also been associated with haemorrhages, infections, trauma to the gums and, in the worst cases, brain abscesses.

The results of the study were published in the Journal of Clinical Orthodontics.

The National Dental Helpline, which offers free impartial advice to the public on all dental health issues, can be contacted on 0845 063 1188 between 9am and 5pm, Monday to Friday. Alternatively, they can be contacted by email on helpline@dentalhealth.org.

Editor’s notes
The original story from the University at Buffalo can be found at http://www.buffalo.edu/news/11585.
For further information please contact the Foundation’s Press Office on pr@dentalhealth.org or 01788 539 792.

The British Dental Health Foundation is the UK’s leading oral health charity, with a 30–year track record of providing public information and influencing government policy. It maintains a free consumer advice service, an impartial and objective product accreditation scheme, publishes and distributes a wide range of literature for the profession and consumers, and runs National Smile Month each May, to promote greater awareness of the benefits of better oral health.

A series of ‘Tell Me About…’ leaflets covering topics such as ‘gum disease’, ‘caring for my teeth’ and ‘healthy mouth, healthy body’ are also available.

Periodontitis is a level of gum disease which weakens the tissues supporting the teeth and if not treated can lead to tooth loss. In adults more teeth are lost through periodontal disease than tooth decay. 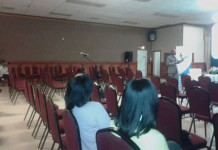