Turks & Caicos Sun – A 41-year-old Turks and Caicos Islands man has been arrested in The Bahamas in connection with 345 pounds of cocaine, with a street value of US$2.5million. 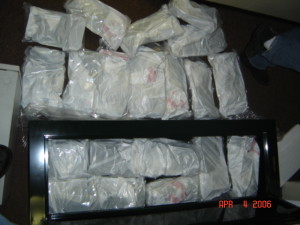 According to a crime report from the Royal Bahamas Police Force, the Turks and Caicos Islander, who name was not released, was arrested along with a 44-year-old man from the Dominican Republic in a joint operation between Bahamas Drug Enforcement Unit (DEU) Officers and the United States Drug Enforcement Administration (DEA) officers on Thursday 30th August 2012.

According to police reports, around 4:30pm, DEU and DEA officers conducted a Joint Operation on North West Cay, an Island North off Great Inagua where the found the drugs.

“The two men are assisting DEU Officers with their investigations and will be arraigned in court early next week,” the Bahamas police report added.

After quietly testing Predator drones over The Bahamas for more than 18 months, the US Department of Homeland Security recently announced plans to expand the unmanned surveillance flights into the Caribbean and the Gulf of Mexico to fight drug smuggling.

The Federal Aviation Administration has already approved a flight path for the drones to fly more than 1,000 miles to the Mona Passage, the strait between Puerto Rico and the Dominican Republic.

For the recent counter-narcotics flights over the Bahamas, border agents deployed a maritime variant of the Predator B drone called a Guardian with a SeaVue radar system that can scan large sections of open ocean. Drug agents can check a ship’s unique radio pulse in databases to identify the boat and owner.

The Predator B is best known as the drone used by the CIA to find and kill Al Qaeda terrorists in Pakistan and Yemen. An unarmed version patrols the U.S. borders searching known overland smuggling routes.

In the 2012 International Narcotics Control Strategy Report (INCSR) which was released by the State Department in Washington in March, it was revealed that Bahamian drug trafficking organizations are using the Turks and Caicos Islands as a transshipment point.

The report stated: “Information acquired by law enforcement suggests that drug trafficking organizations have utilized air drops and remote airfields to deliver large cocaine shipments to the Turks and Caicos Islands and to The Bahamas from Venezuela and Colombia. Recent investigations reveal that Bahamian drug trafficking organizations are using the Turks and Caicos Islands as a transshipment point.”

According to the INCSR report, cocaine continues to transit The Bahamas via go-fast boats, small commercial freighters, containers, and small aircraft. Small sport fishing vessels and pleasure crafts move cocaine from The Bahamas to Florida by blending in with legitimate traffic that transit these areas.

It was also noted that larger go-fast and sport fishing vessels transport marijuana from Jamaica through The Bahamas and into Florida in the same manner as cocaine and that traffickers also skirt along the loosely monitored Cuban coast line, looking for opportune moments to break for Florida through Bahamian waters.

During 2011, The Bahamas and U.S. law enforcement assets worked together on over 35 successful interdictions. U.S. antidrug-related agencies estimate that there are 12 to 15 significant drug trafficking organizations operating in The Bahamas.

It was noted that Haitian and Haitian-Bahamian drug trafficking organizations continue to play a major role in the movement of cocaine from Hispaniola (the island that is made up of Haiti and Dominican Republic) through The Bahamas. Investigations of these organizations are hindered by an enduring lack of Creole speakers within the Drug Enforcement Unit.