Nassau, Bahamas — Crime has become the number one pressing issue facing the country and both British and American Embassies have highlighted the concern in their travel advisories.

Guests vacationing in the Bahamas are being asked to impose their own curfews and not walk in the downtown city after dark.

According to the British Travel Advisory, guests should be vigilant at all times and not carry large amounts of cash or wear jewellery.

Safety and Security – Crime
Some tourists have been victims of robbery, sometimes armed, in isolated areas and more recently in tourist areas of New Providence. The local authorities have increased police patrols in the tourist areas.

You should be vigilant at all times. Do not walk alone away from the main hotels, tourist areas, beaches and downtown Nassau particularly after dark. Take care if travelling on local bus services after dusk on routes away from the main tourist routes. Do not carry large amounts of cash or jewellery. Assailants may be armed.

The outlying islands of the Bahamian archipelago (known as the Family or Out Islands) are attracting an increasing number of visitors. These islands are relatively free of crime compared to the main islands of New Providence (Nassau) and Grand Bahama (Freeport) but sensible precautions should still be taken. ( http://www.fco.gov.uk/en/travel-and-living-abroad/travel-advice-by-country/north-central-america/bahamas#crime )

The concerns by the British are yet to be reported by the WUTLESS media in the Bahamas, as the crime crisis rocks the nation.

However, if you thought that advisory on the Bahamas from the British was bad, advisory posted by the American Embassy is worse and notes “a spate of more violent criminal activity in 2009,”. The report highlights how three groups of tourist have been held up in the country during big time daylight hours. 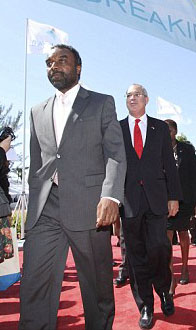 It also points to a the many boat thefts that have taken place in the country; particularly on the islands of Abaco and Bimini. Recently three men were caught in the possession of a stolen the boat owned by guests at the Bimini Bay Resort.

The island magistrate hearing the matter only charged the trio a fine of $1,000. We have learnt one of the men was at the time renting a unit on the island from the judge. [INCREDIBLE]

The advisory issued by the US reads:

CRIME: The Bahamas has a high crime rate. New Providence Island in particular has experienced a spike in crime that has adversely affected the traveling public. Pickpocketing and theft remain the most common crimes perpetrated against tourists. However, there has been a spate of more violent criminal activity in 2009. Three separate groups of tourists were held at gunpoint and robbed at popular tourist sites in and near Nassau; each of these incidents occurred during daylight hours and involved groups of more than eight persons. Several other groups of tourists allegedly were victims of armed robbery at more remote locations.

The U.S. Embassy has received reports of assaults, including sexual assaults, in diverse areas such as in casinos, outside hotels, or on cruise ships. In several incidents the victim had reportedly been drugged. The Bahamas has the highest incidence of rape in the Caribbean according to a 2007 United Nations report on crime, violence, and development trends. Much of the violent crime occurs outside of areas frequented by tourists, such as the “over-the-hill” section of Nassau. Two American citizens were murdered in Nassau in 2009, both allegedly in residential areas. Home break-ins, theft, and robbery are not confined to any specific part of the island.

The upsurge in criminal activity has also led to incidents which, while not directed at tourists, could place innocent bystanders at risk. An altercation at a major resort resulted in the shooting of two security officers, while several daytime robberies in Nassau led to exchanges of gunfire on busy streets.

Criminal activity in the outlying family islands does occur, but on a much lesser degree than on New Providence Island. The Embassy has received reports of burglaries and thefts, especially thefts of boats and/or outboard motors on Abaco and Bimini.

Counterfeit and pirated goods are available in The Bahamas. Transactions involving such products may be illegal under Bahamian law, even though those laws are not routinely enforced. In addition, bringing such products into the United States may result in forfeitures and/or fines.

Some organized crime activity is believed to occur in The Bahamas, primarily related to the illegal importation and smuggling of illicit drugs or human trafficking. The Bahamas, due to its numerous uninhabited islands and cays, has historically been favored by smugglers and pirates. Most visitors to The Bahamas would not have noticeable interaction with organized crime elements; however, persons who operate their own water craft or air craft should be alert to the possibility of encountering similar vessels operated by smugglers engaged in illicit activities on the open seas or air space in or near The Bahamas.

Visitors are advised to report crime to the Royal Bahamas Police Force as quickly as possible. Early reports frequently improve the likelihood of identifying and apprehending suspected perpetrators In general, the Royal Bahamian Police Force is responsive to reports of crime and takes the threat of crime against tourists very seriously. However, the police response is sometimes slowed by a lack of resources or by the physical constraints imposed by geography and infrastructure. [ http://travel.state.gov/travel/cis_pa_tw/cis/cis_989.html ]

Both British and United States travel advisories are indeed shocking and perhaps points to the reasons for a sharp decline in stopover visitors to the country.

In 2007 and 2008 when TOURISM numbers sharply fell, in Jamaica guests numbers increased and no one in the Ministry of Tourism could tell us why. Perhaps the travel advisories paints a picture as to why.

The country has experienced a whooping record-breaking 104 murders already in 2011, with more than 16 incidents still unclassified by the police. The number is the highest ever since murders were recorded in the country.

Not a words on the advisories have come from the Minister of Tourism, Vincent Vanderpool Wallace. Not one word of concern has come from Minister of Foreign Affairs, Brent Symonette. Mums the word from Minister of National Security, Alton Tommy Turnquest, and the WUTLESS media in the Bahamas say ‘where ya put me’.

WE CAN DO BETTER!