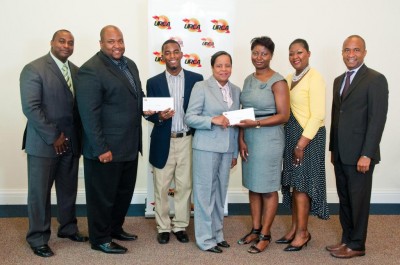 The Utilities Regulation and Competition Authority (URCA) will sponsor two youth at the International Telecommunication Union’s (ITU), BYND 2015 Global Youth Summit in San Jose, Costa Rica next month. Both are recent graduates of The College of The Bahamas.

Audison Beaubrun, who completed a Bachelor of Science degree in Mathematics and Kyle Walkine who completed a Bachelor of Arts degree in Media Journalism. Audison is currently enrolled at the Florida Institute of Technology (FIT) for PhD studies in Applied Mathematics; and Kyle is employed at the Jones Communications Network (JCN) where he is a reporter.

The BYND 2015 Global Youth Summit will be hosted by the ITU, which is an agency of the United Nations (UN). Through a series of workshops, presentations and conversations on a range of issues regarding how information communication technologies (ICTs) can be used to bring about meaningful social change, Audison and Kyle, along with youth from countries around the world will be tasked with the considerable challenge of pooling their ideas and recommendations into a single global statement.

This statement will be delivered by the President of Costa Rica later in the month, to the United Nations General Assembly. The ITU estimates that 500 youth will attend the Summit in Costa Rica, in addition to others who will participate via the Internet from Summit Hubs around the world. There will be 15 Summit Hubs across 12 countries in four languages.

Summit organisers describe the event as “a platform for young people to ensure their inclusion in the most important decisions of the 21 st century”. They project that the Global Summit “will assemble young people from all corners of the globe with a view to highlighting their priorities and capturing their combined voice in crucial national and international policy and decision making processes”. Their efforts are expected to help shape the UN’s agenda beyond 2015 – the year that the Millennium Development Goals (MDGs) will be delivered – the role of youth in this global movement and the escalating significance of ICTs in daily living.

Electrical Engineer and URCA Case Officer, Mr. Waldon Russell will also travel to the Summit in San Jose, serving as the Head of Delegation and mentor to URCA’s sponsored youth. The event which takes place from September 9 th – 11 th , will comprise five themed sessions:

The Summit, to be held at the Crowne Plaza Hotel Corobici in San Jose, will also include off site visits, to Costa Rica’s National Biodiversity Institute, Earth University and the Organisation of Tropical Studies for the “Respect Your Environment” session and participants will also visit the country’s National Stadium as part of the “Be Healthy” session. In addition to the noted local Costa Rican organisations, Summit partners also include UNICEF, the World Health Organisation, the Walt Disney Company, World Economic Forum and UN Volunteers along with other international agencies.

In presenting the awards, URCA Chairman Randol Dorsett expressed his delight in URCA’s sponsorship of the young men in such a special opportunity. He offered encouragement to the awardees to be active participants in the Summit, to share their knowledge and ideas while also being open to learning as much as possible from others at the Summit. Chairman Dorsett underscored URCA’s commitment to supporting Bahamian youth in important endeavours like the Global Summit. He lauded their achievements and challenged the awardees to return home prepared to share their experiences with broader Bahamian audiences.

For more information on the Summit, visit: