Nassau, Bahamas — Sir Jack Hayward in an exclusive with The Guardian has urged the government to quickly find solutions to the country’s growing crime problem. Recently some eight violent murders occurred in one-week. In that week of death and mayhem the country witnessed the slaughter of a pregnant woman who was gunned down and shot multiple times on the doorsteps of her home.

Latest crime statistics reveals crimes have shot up in almost every category and murders for 2010 were up by a 33%.

Calling the situation in the country “worrisome” Hayward told the Guardian, “Any moment now the American Embassy could be advising American citizens that this is an unsafe country to travel (to).” He added that the rising crime in the Bahamas is scaring some potential investors.

Murder in the country hit a record high last year with scores of other incidents unreported or unclassified.

“When a potential investor or a potential visitor sees the headline, Up to record levels – More than last year, and so on, they are obviously going to say, ‘Hey is this a safe place to travel?’,” Sir Jack noted.

“I mean the government has got to do something about the crime rate.”

Just hours after reading Hayward’s comments the Minister of Tourism who we have classified as running his mouth like the BP OIL GUSHER in the Gulf did not disappoint us. He came back spewing from the mouth telling lies.

Wallace suggested that crime in not scaring away investors or guests coming to the country.

Bahamas Press wonders what JACKASS would say such a thing? Then again, here’s another ‘Oil Gusher’ whom fails to properly count the numbers of arrivals into the country.

Only Vincent Vanderpool-Wallace believes the incident where a woman who was shot dead while nursing her baby on vacation in the Bahamas didn’t scare away potential tourism business.

Only Vincent Vanderpool-Wallace believes the incident where a New York police officer who was shot outside the Christie compound following a daring daylight robbery, did not scare away potential tourism business.

Only Vincent Vanderpool-Wallace believes the incident where businessman Hywel Jones, a resident of the United Kingdom (UK) and a principal at the Britannia Group Limited, had just exited his car to head into his Compass point office in Western New Providence when he was approached by a man who shot him in the head. He died as a result, but ‘Oil Gusher’ believes even this did not scare away potential business to The Bahamas.

Vincent like many in the Cabinet he serves has his heads so buried in the ‘bahind’ of Papa even the raw sewerage backed in his pipes since 1986 smells like vintage wine to him. He is lost, off course, out of touch and adrift from reality in this country. The ministry of tourism cannot properly count tourist arrivals these days and therefore, to analyze the crime situation is way over its head.

Vincent Vanderpool-Wallace has become nothing more than another JACKASS sitting around the table eating dung and calling it pea and rice.

Like the pipeline leaking in the Gulf we must find a way to put a cap on him and stop him from telling lies! YOU HAVE NO SHAME VINCENT! YOU HAVE BEEN MOST NEGLECTFUL!

HE HAS NO SHAME! 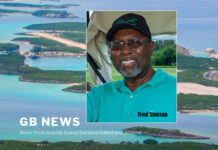