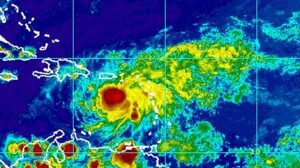 NASSAU, The Bahamas – The National Emergency Management Agency, NEMA, is pleased that all watches and warnings regarding Tropical Storm Emily have been discontinued for the islands of The Bahamas, and the Turks and Caicos Islands.

At 6 p.m. Thursday, August 4, 2011, the Department of Meteorology issued its final alert, advising that Emily has degenerated into a trough of low pressure, but will still produce heavy rains.

NEMA had partially activated its operation centres on the Family Islands projected to be affected by Tropical Storm Emily, in the event the situation had escalated into a real threat of a severe thunderstorm or a hurricane.

A warning means that tropical storm conditions are possible in the mentioned islands within 36 hours.

A tropical storm watch was also issued for the Northwest Bahamas, which includes the islands of Grand Bahama, Bmini, Abaco, the Berry Islands, Andros, New Providence and Eleuthera.

NEMA had also put on alert representatives of its Emergency Function Support groupings to report to the National Emergency Operations Centre at   the Churchill Building, to handle any eventuality.