Comments attributed to C. A. Smith in the Nassau Guardian were actually made by George Smith! Why would the 150 plus year old newspaper publish such a serious lie?


Nassau – The Nassau Guardian this morning made [WE BELIEVE] an intentional mistake when it attributed comments from George Smith to C. A. Smith, who is currently serving as Deputy to the Governor General.

In the lead article in Saturday 14th July, 2018 edition of The Nassau Guardian, written under the headline “Deputy GG slams heroes selection”, with a huge photo of Deputy to the Governor General C. A. Smith was featured.

We at BP say it is intentional because we know Guardian General Manager Brent Dean is also the son-in-law of Janet Bostwick – who wants the top job as GG.

And this kind of wutless reporting proves that the morning paper continues to fail in its duty to be factual, honest, credible and fair. In its own presentations today, The Guardian proves that it has crippled its own credibility, failed to fact check its articles, or even examine, based on its own institutional wisdom, what was being presented to the public! This is shameful! This goes against every standard in the profession. We believe it is not an error but an intentional exercise.

Why didn’t anyone question the comments of the Deputy to the GG regarding whether they were indeed true? Did anyone made contact with Mr. C. A. Smith?

Why wasn’t the reporter called, quizzed or questioned on the legitimacy of the comments before they appeared in the newspaper?

And what editor/publisher you know would allow comments to flow from their newsroom without having a proper editorial examination of the reports before they hit the streets?

This is pure WUTLESS Journalism, which should be frowned upon. This is unacceptable coming from what suppose to be a newspaper of record. and should be rebuked from every quarter of this society.

We at Bahamas Press has long called for a boycott of the newspapers in the country which have caught a high temperature of bias!

Imagine that, a 150-year-old newspaper is now in the business of selling FAKE NEWS and “JUNGALIST” REPORTS! And why does the Guardian believe George is even a credible witness on anything? 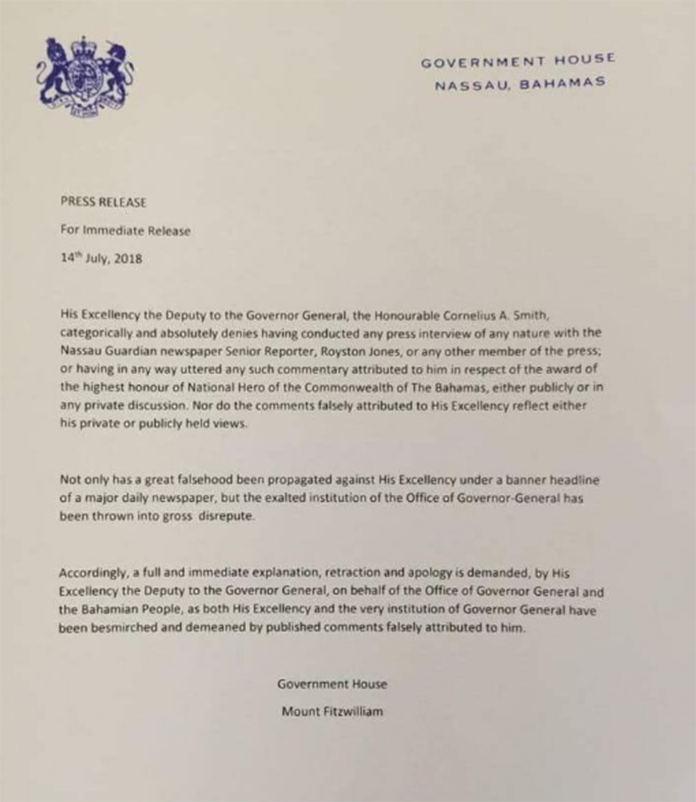