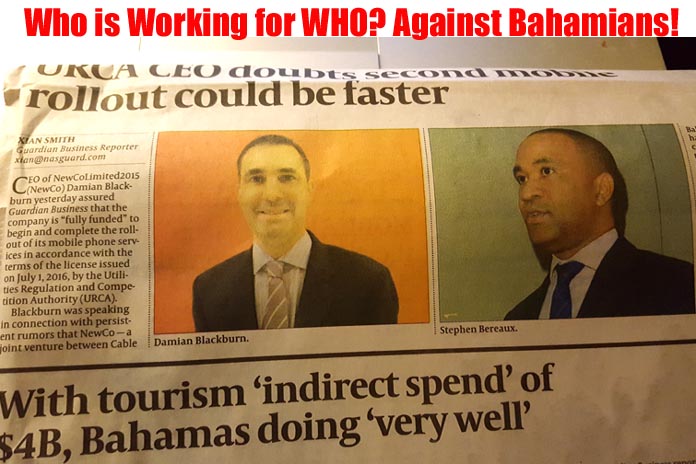 Nassau, Bahamas – Damian Blackburn, the man who runs Digicel’s operation in Haiti, was in the Nassau Guardian this past week [Thursday 18, 2016], attempting to dismiss what he claimed were rumors against Cable Bahamas’ mobile struggles to raise the needed capital to start up the second mobile license.

Blackburn, you would remember, was announced a few weeks ago as the new top man assigned to set up the second mobile provider operated by Cable Bahamas. We knew he was here and reported long before anyone else knew that he had been issued permission to work in the Bahamas.

For weeks now we have seen how URCA sources and officials were in the papers seeking to make demands of BTC to allow NewCo the use of BTC’s massive nationwide network to get NewCo’s new mobile service up and running.

The problem has been that NewCo has no real infrastructure anywhere in the capital or on the family islands and to have such set up in just 90 days from the issuance of its license is just impossible.

Bahamas Press has questioned URCA’s bold support for NewCo, as they sounded their opinions loudly in the morning dailies as a regulator and made demands in favour of the Cable Bahamas mobile company against all the standards as a regulator.

In last week’s edition, like a paid mouthpiece for Cable Bahamas, URCA’s newly elevated CEO Stephen Bereaux upheld the opinion expressed by Blackburn that they have no “reason to believe that NewCo does not have the adequate funds to go forward…” How he get in dey business?

Why is Bereaux, who is supposed to be fair and act as a regulator in these matters, clearly showing a bias?

Mind you, this is the same dude who is paid by the public to regulate the business, and yet, before he could show evidence of such, he is in the papers trying to convince the public that Cable Bahamas should have access to BTC’s network even though Cable Bahamas is supposed to build its own.

The question we want to leave here is this: Who is Mr. Bereaux really working for? Cable Bahamas, URCA or Blackburn? Maybe all of the mentioned.

What we say is this – URCA should add to its list of applications now published in the newspapers one for its CEO!

And a REAL Bahamian should apply!