George Town, Exuma — Bahamas Press is once again placing serious allegations before the feet of the Royal Bahamas Police Force and is questioning the credibility of the men and women in uniform on the island of Exuma.

BP reported a few weeks ago the disappearances of some $10,300 along with a cache of weapons, which were stolen out of the police precinct just outside George Town. Since our report nothing has been forthcoming from the high command in the RBPF. Nothing has come from the minister with responsibility and nothing is announced or said from the desk of the Commissioner of Police.

We are concern here because BP has been digging deep into the events involving the stolen money and to our surprise we can only conclude that someone in uniform maybe linked, GUILTY AS SIN, and is corruptly involved in the incident, and here’s why. 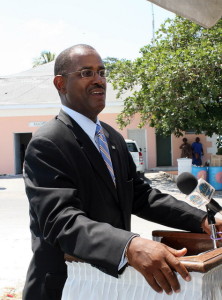 Sources close to the story have updated our news team on the timeline to the funds and weapons disappearance.

Here’s what we know. A complaint was filed at the police station in question by the owner of a gas station on the island. That owner gave clear information to the RBPF officers pointing to who stole her funds, when the money was removed, how it got out of her possession and where the accused thief hid the cash. She also informed local police where the accused individual resided on the tiny island.

Sources tell us, police upon acting on the information, recovered the money from the accused and formally arrested a female relative of the gas station owner. This is how the $10,300 got into police hands and this is just the beginning of the story.

We are told police penciled the charges against the accused culprit and documented the events leading to the woman’s arrest, however, no mention was made of the recovery of the $10,300 to the officer-in-charge on the island; and this is where the story gets interesting.

Reliable sources tell us, without the OIC being aware of the funds, someone decided that same evening to stage a robbery at the police station, which we know is manned 24 hours by officers.

Following our first report on this hot story, a reporter at the Nassau Guardian decided to telephone members of the HIGH COMMAND to get information on what is happening down in Exuma.

Superintendent Morey Evans, officer in charge of Exuma and the Southern Bahamas confirmed to The Nassau Guardian that approximately $10,300 was taken out of the police station last Wednesday [Oct. 13th] sometime after 9PM. He noted that a “widespread investigation” had been launched and police were leaving no stone unturned. [WHO WILL POLICE THE POLICE?]

Well we have begun our own investigation in George Town, and while we will not mention names in this article, anything is possible in our next edition. But here’s what we know thus far.

For some time now victims of crime in Exuma have been having a tough time getting matters resolved at the local precinct.

In fact, Bahamas Press has been informed of a host of incidents involving witness intimidating, the shredding of evidence, the disappearance of confiscated drugs and weapons have become commonplace in the Exuma police station. Residents have screamed charges to these allegations, where we are told officers have been complicit, again GULITY AS SIN!

We know of one officer in particular, whom we will not name today, was recently removed from Exuma and deployed elsewhere in the Bahamas for his alleged involvement in such nefarious activities. In fact we are told his removal came just before these recent events. Could there be and endemic culture of criminal behaviour by officers on the Island of Exuma? BP will have to further explain, but for now we wish to close this case of the $10,300 and the sooner we do the better.

We remind the HIGH COMMAND OF THE RBPF that there is but ONE LAW BOOK in this country! And that law deals with all culprits no matter their station or position in life. WE DO NOT BUY THE STORY ONE BIT OF A BREAKIN at the EXUMA POLICE STATION. We call on the powers that be, to remove POSTHASTE and FIRE THAT DAMN OFFICER [S] FROM THE RANKS! They have not brought honour to the uniform!

BP has more to share and when we come the next time we intend to present names and numbers.