NASSAU, BAHAMAS — If people in this country would only practice what they preach then and only then do we believe crimes against the innocent would cease and we all would find peace. Until then, we say let the war continue!

The photo above is a snapshot of a meeting of young people at  FNM headquarters on Mackey Street over the weekend.

The event was to engage job hunters into the Ministry of Youth’s nationwide employment initiative. The programme, launched by the Prime Minister Hubert Ingraham during his budget communication in the Parliament, is to temporarily employ 1,000 workers over next 12 months.

Now readers seeing these pictures must question why is it leaders in the FNM have no DAMN SHAME?

Just last week, Papa could be overheard in the HOUSE telling the nation as he wrapped up his budget contribution, that no Bahamian will be discriminated against in the job programme. He told members how the FNM would not be like the former government, and have applicants collecting letters from any MP in an attempt to politicize the event. In fact Ingraham made it clear, that the programme will not be political. But if this is indeed true –

• Why were persons gathered inside the FNM HEADQUARTERS on Mackey Street this weekend collecting applications from job seekers attending this event?

• Why was the minister responsible for assigning of the jobs present in the DAMN FNM headquarters?

• Since public money is funding the programme, why were young persons from the DNA, NDP, BDP, The Constitution Party and PLP not invited to attend?

What is this? Job hunters told they do not have to see an MP to get a job, according to Papa, yet, they just need to JOIN the FNM and file their application at the DAMN FNM headquarters?

Look at the New Low Bahamians have been subjected to in order to get a job.

Firstly, the unemployed were seen being lectured in the FNM headquarters by, Calvin ‘Da Nuisance’ Farquharson. Now here’s a man who could only tell the applicants; if Ingraham was to piss on them, it is not piss at all but rain. What a Shameless wonder!

Another panelist lecturing the applicants was the Chairman of the Torchbearers Association, Jamal Moss. When did he become employed with the Ministry of Youth? Sitting just two seats away at the FNM youth leadership table was a woman we remember in the run up to the BTC GIVEAWAY. She we remember, was all over the media promoting a poll done by a group named the Consumer Advocacy Group. She argued at the time that the majority of Bahamians polled agreed for the sale of BTC to Cable and Wireless. That polling must have been taken in the Cabinet Room, but yes, SHE WAS ALSO PRESENT IN FNM COLOURS!

The New Low we call it was when we saw the Minister of Youth Charlie Maynard at the event. Ya see, Maynard’s Ministry is responsible for processing the applicants, and it is he who headed the FNM speakers to job seekers. WHAT ‘VICKEDNESS’!

Look what the young voter must subject themselves to in 2011. They must bow down in front of the Emperors, without shoes, prostrate on the red floor while Papa, Farquharson, Pillsbury and the others lecture young unemployed persons to the ways of the FNM. Some people in the FNM have no DAMN SHAME and should not reduce the unemployed to this. 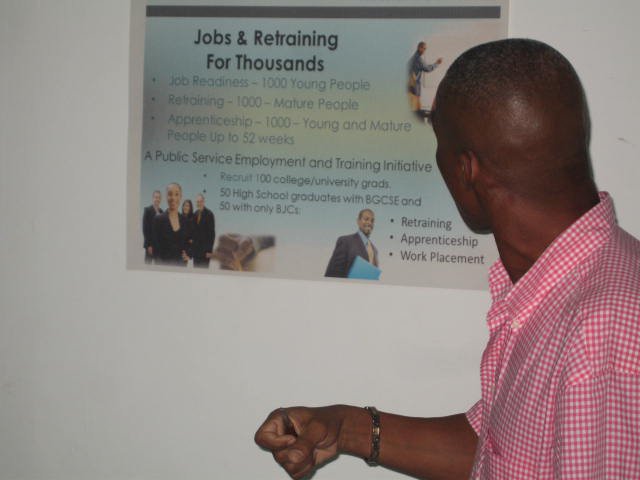