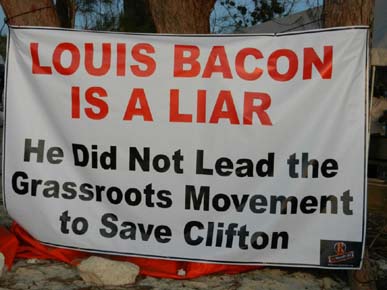 I was appalled to read how Louis Bacon’s lawyer Fred Smith decided that he was ready to take the Christie Government to court over a row behind the gates of Lyford Cay between Bacon and his neighbour.

What an asinine commentary to take place in the public domain against a sovereign power.

Here it is, Bacon and his Coalition, along with the BNT, says they want no oil drilling, they want control of Clifton and they want a freedom of information act – all of which are against the plans being crafted to the benefit and advancement of the Bahamian people by the Christie Government.

Now here come Fred Smith – warning Christie’s administration that if they fail to deliver on matters at Clifton, he, through Louis Bacon, will take members of the Government of the Bahamas to court.

The more I look at these developments and statements by Bacon’s Coalition, the more I see a group being organized against the PLP Administration.

They are committing an outright terror against the Government and are demanding conditions like a slave driver of some plantation field.

Well, I submit the Bahamas is no plantation nor are we slaves to have our duly elected government submerged in some war in a plush private community.

The Bacon Coalition should catch themselves before they are found collecting their passports and pointed to the door.

We will not have it!